Your wedding vs your grandkids’ wedding: The amazing price difference 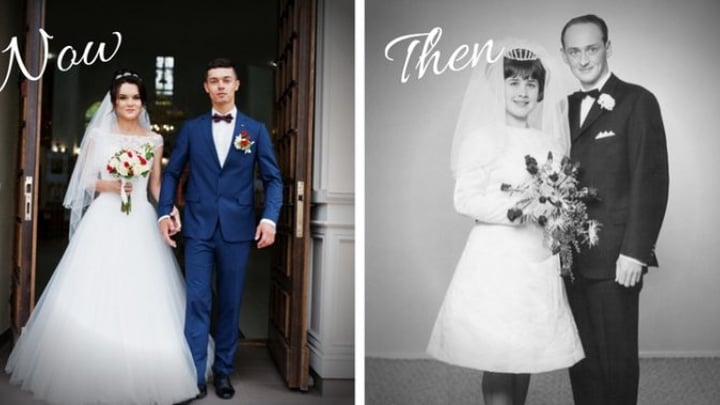 Even the cost of a very modest wedding has soared above inflation over the past 40 years. Source: Getty

“You can have a wedding for cheaper than that. Back in my day, we only paid a quarter of those costs!”

We all likely heard it from our parents, and we’ve probably said it to our own kids and grandkids.

But one BuzzFeed contributor has gone to the trouble of figuring out exactly what her parents’ 1974 wedding would have cost in today’s money, and it’s pretty shocking.

Meg Keene, the founder and editor-in-chief of A Practical Wedding, discovered that her parents’ wedding, which cost A$2,095 in 1974, would come to a total of A$10,068 when factoring in inflation. However, when Keene started getting quotes for the exactly same itinerary in 2017, she quickly realised that things had changed far more than anyone expected.

Keene puts it down to the fact that weddings aren’t the sideline they used to be, but a big industry in which the price of everything has skyrocketed. So, even youngsters who want a modest wedding just like their parents had will end up spending far more getting it than inflation alone would indicate.

“It’s kind of a chicken-and-egg thing. Sometime between 1974 and today, people realised that weddings aren’t necessarily a side business. And now there’s a whole industry around weddings,” Keene writes in the article for Buzzfeed. “Wedding vendors aren’t out to get you; most are small business owners who are charging for the increase in time, attention and perfection that couples and their parents have come to expect.”

For most people, a wedding is an incredibly important part of life and they want to get it just right, but achieving that effect is now more expensive.

As exciting as it can be to try and help plan your kid’s wedding, it’s worth bearing in mind that even when it seems like they’re throwing money around on things that don’t matter, it might not be something they can help – things just do cost more.  Or perhaps you can convince them that although they want things to be perfect, the passage of time will show them that it doesn’t really matter.

And if they give up and decide to elope, maybe don’t take it personally!

How much did your wedding cost?