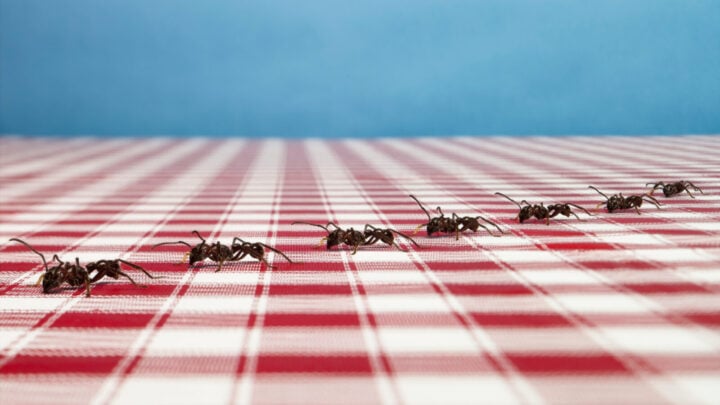 Ants and other creepy crawlies are especially active during summer. Source: Getty.

Nothing beats an Aussie summer, but one of the less-desirable elements of the season is excessive ants. In the warmer months, some creepy crawlies may start to take refuge in your home to escape the heat. The good news is, however, there are several ways to get rid of unwanted ants and other bugs that don’t involve reaching for any chemical-laden sprays or repellants.

It sounds crazy, but the chalk your grandchildren love so much could actually be an effective way to repel ants. Just as we don’t like walking through mud or dirt if we don’t have to, ants don’t like passing across chalk. As many people on social media have pointed out, the insects can’t stand stepping onto it. The smell of the chalk disrupts the ants’ ability to pick up scents and they become confused.

2. Serve up some herbs and spices

Herbs and spices can transform a meal from average to delicious, but that’s not their only super power. Black pepper, mint, cinnamon and garlic powder all produce smells that ants can’t stand.

All you have to do is leave the herbs in small bowls or sachets around the house or, alternatively, you can dip cotton balls in oil versions of the spices. Even better, this doesn’t just work on ants, with a number of other critters – such as cockroaches and fleas – also turned off by the herbs’ scent.

Vinegar is an effective cleaning product, but did you know it’s also a deterrent for ants? Just like chalk and herbs, vinegar causes problems for ants’ scent trails.

Just mix together equal parts water and vinegar and wipe down the areas where ants have congregated. It may take several wipes, but in time you’ll notice the ants are no longer sticking around like they used to.

Believe it or not, citrus is toxic to ants and will kill them on contact, so it’s normal for them to avoid the scent like the plague. If you place citrus peels near the entry points of your home, ants won’t dare go anywhere near them and will leave in search of another food source.

Citrus fragrances and scented spray and wipes also do the trick. And you can even spray lemon juice and water through different areas of the house to stop them from coming back.

Do you have any other tips to stop ants from coming inside?