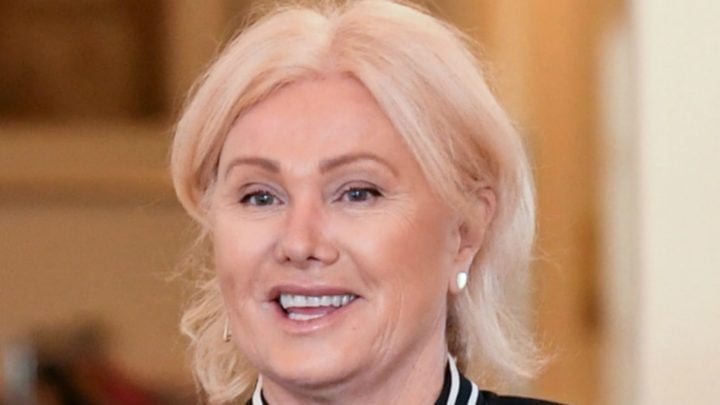 Deborra-Lee Furness watched on proudly as her husband Hugh Jackman was given the Companion of the Order. Source: Getty.

It’s no secret that Deborra-Lee Furness and her hunky husband Hugh Jackman are one of the happiest couples in Hollywood, and on Friday the Australian actress couldn’t wipe the smile off her face as Hugh was awarded the Order of Australia medal.

Deborra-Lee watched on proudly as the Greatest Showman star was given the Companion of the Order, which is the highest of the four levels of the Order of Australia, for his services to the performing arts.

Dressing for the occasion, Deborra-Lee didn’t disappoint in the style stakes as she stepped out in a monochrome ensemble – a striped collared dress teamed with a cropped black jacket and matching leggings. The actress completed the effortless yet glamorous look with platform shoes, a stylish side bag and simple pearl earrings, while she wore hair in an elegant up do for the occasion.

Meanwhile, after the ceremony Hugh paid tribute to his beloved wife and their two children, Oscar and Ava. The actors met on the set of the Australian drama Corelli in 1995 and have been going strong ever since. Hugh and Deborra-Lee, who celebrated their 23 years of wedding bliss earlier this year, have two children together, 19-year-old Oscar and 14-year-old Ava.

“On this occasion, I’m reminded that I share this honor with my parents, siblings, friends and, especially w Deb, Oscar, Ava,” he wrote on Twitter. “There are countless teachers, coaches and mentors who’ve taught and inspired me along the way. I will forever be in their debt. Thank you Governor General.”

On this occasion, I’m reminded that I share this honor with my parents, siblings, friends and, especially w Deb, Oscar & Ava. There are countless teachers, coaches and mentors who’ve taught and inspired me along the way. I will forever be in their debt. Thank you Governor General pic.twitter.com/Y9syilF1mx

Many fans on social media have since congratulated Hugh on the award, with one writing: “Congratulations! You deserve the honour fully and we are all very proud of you!”

Meanwhile, it comes after Hugh, who has been touring around his home country with ‘The Man, The Music, The Show’, paid tribute to his beloved wife earlier this month during the Brisbane leg of his concert.”A few times in my life I’ve known things like for sure… one of those was Deb,” he gushed to the crowd at the time. “I knew very early on in our relationship we were going to spend the rest of our lives together. I could feel it.”

Hugh then told the crowd at his Brisbane show that he almost didn’t make the cut as Wolverine in X-Men. He revealed: “I went home to Deb and started whinging about everything… And she listened to me very patiently for about an hour and finally she just said, ‘Listen, I think you have just got to trust yourself. You are worrying way too much about what everything else is thinking. Just go back to the character, focus on that, trust your instinct. You’ve got this.'”

He continued, before dedicating his next song to his lovely wife: “And to me that is love. Someone who believes in you when you don’t really believe in yourself. This whole show is dedicated to Deb and the kids.”
Hugh is not shy about expressing his love and devotion for his wife, and by the looks of things, these two are going stronger than ever.

Last year, while accepting the Kirk Douglas Award for Excellence in Film for his contribution to cinema at the Santa Barbara Film Festival, Hugh teared up when talking about his wife of 23 years, saying she taught him that life is “not defined” by highlight reels.

“Life actually happens in between that. Life happens when the camera is not going,” he said. “You believed in me when I couldn’t. You’ve loved me with a passion and a depth that I didn’t even know existed — and I don’t think I felt that I deserved. You have pushed and encouraged me when I was scared to venture out. You have smiled me into smiling. You have sung me into singing. You have loved me into loving and like everything I do in my life, I share this with you. I love you.”

Are you a fan of Hugh Jackman and Deborra-Lee Furness? Do you like her style?