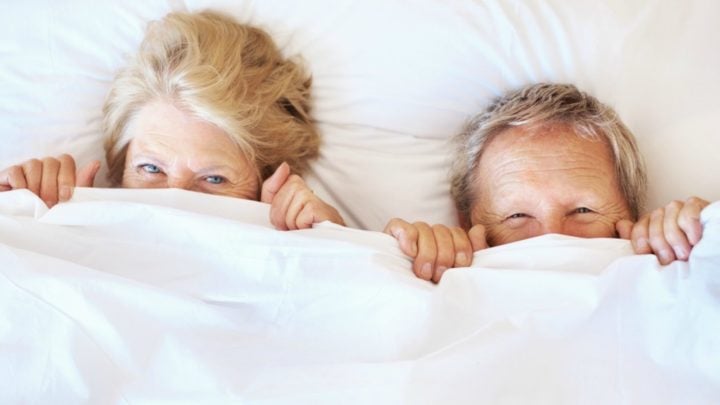 Researchers believe getting intimate with a stranger may be an effective way of building a connection with them. Source: Getty

In days gone by it was common for people to get to know their partners over a long period of time before getting intimate.

Long before the days of ‘free love’ going steady was all the rage and in an era before dating apps and websites, people would go on numerous dates as a way of building connections and figuring out if they liked someone or not before jumping into bed with them. If they were lucky, they’d sneak a kiss or two along the way.

Of course, dating is no longer what it used to be and most couples aren’t spending long periods of time with each other before getting sexy between the sheets. In fact, new research published in the Journal of Social and Personal Relationships by researchers at the University of Rochester has found sex early on may actually help initiate romantic relationships between potential partners.

Not only may sex play a role in attracting potential partners, but it may also be a crucial part of encouraging the formation and attachment between people.

“Sex may set the stage for deepening the emotional connection between strangers,” lead author Gurit Birnbaum said in a statement. “This holds true for both men and women. Sex motivates human beings to connect, regardless of gender.”

The study, which analysed heterosexual relationships, found that both men and women try to connect with potential partners when they’re sexually aroused. In four interrelated studies, participants were introduced to a new acquaintance in a face-to-face encounter. Researchers noted sexual desire actually triggers behaviours that can promote emotional bonding during these encounters.

“Although sexual urges and emotional attachments are distinct feelings, evolutionary and social processes likely have rendered humans particularly prone to becoming romantically attached to partners to whom they are sexually attracted,” co-author Harry Reis said in a statement.

The first study analysed whether sexual desire for a new acquaintance was associated with non-verbal cues signalling relationship interest. Known as immediacy behaviours, researchers categorised these behaviours as the synchronisation of movements, close physical proximity and frequent eye contact.

The study included 36 women and 22 men who lip-synched to pre-recorded music with an attractive, opposite-sex study insider – who participants thought was also involved in the study as a participant. Each participant then rated their desire for the insider, with researchers finding greater signs of immediacy behaviours when a participant desired the insider more.

In a second study of 38 women and 42 men, participants were told to slow dance with an insider, again thinking they were other participants in the study. Researchers noted an association between synchronisation of body movement and the participant’s desire for the insider.

Read more: Why dating was so different in the ’60s

Participants then interacted with a participant from the second study group and were filmed discussing interpersonal dilemmas. Judges then rated each participants’ behaviours relating to caring and responsiveness. The activation of the sexual system resulted in behaviours associated with caring about a potential partner’s well-being.

Researchers believe the link between sex and forming a bond with a partner is because of how humans have evolved in order to raise children.

“Throughout human history, parents’ bonding greatly increased the children’s survival chances,” Birnbaum explained. “Sexual desire may play a causally important role in the development of relationships. It’s the magnetism that holds partners together long enough for an attachment bond to form.”

It is also thought similar brain regions are activated when a person experiences sexual desire or romantic love.

What are your thoughts on this? Do you prefer to get to know someone before you jump into bed, or is it more fun to be spontaneous with sex?