Place your bets! Here are the best jokes about playing cards 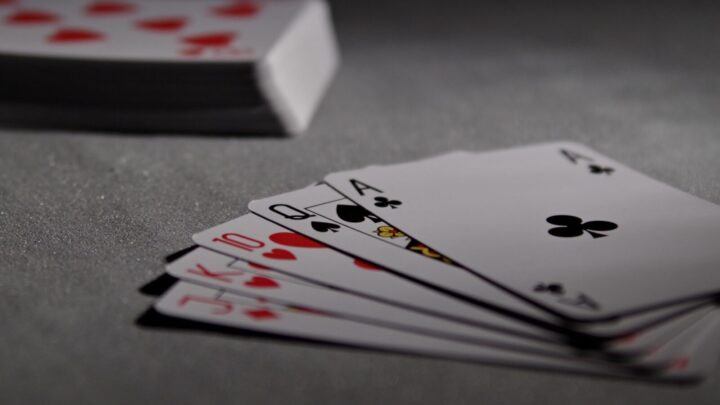 Joe suddenly hears a voice booming from the sky

Joe’s just gotten his morning coffee on the way to work when a booming voice tells him: “Take the freeway instead of your normal shortcut.” He takes the freeway and when he gets to the office everyone is talking about a huge accident that occurred on his normal route to work.

Three days later he’s grilling burgers in his backyard and the voice tells him: “Go inside and watch television.” He does and through the window outside he watches a huge oak tree fall and crush the grill where he was just standing.

He’s dealt two red aces and the voice tells him to go all-in. He shoves all-in and five different players call. The flop is Jack of clubs, 10 of clubs, 9 of clubs…

A man walks into a bar and notices a poker game at the far table. Upon taking a closer look he sees a dog sitting at the table. This peaks his curiosity and he walks closer and sees cards and chips in front of the dog.

Then the next hand is dealt and cards are dealt to the dog. Then the dog acts in turn with all the other players, calling, raising, discarding, everything the other human players were doing.

However none of the other players seemed to pay any mind to the fact that they were playing with a dog, they just treated him like any other player. Finally the man could not longer hold his tongue so between hands he quietly said to one of the players: “I can’t believe that dog is playing poker, he must be the smartest dog in the world!”

The player shrugged and said: “He isn’t that smart, every time he gets a good hand he wags his tail.”

A bunch of lawyers were playing poker

A bunch of lawyers were sitting around the office playing poker.

Henderson threw down his cards. “That’s it! I’ve had it! Johnson is cheating!”

“How can you tell?” Phillips asked.

“Because, those aren’t the cards I dealt him!”