Daily Joke: A little boy told his dad he was going to run away 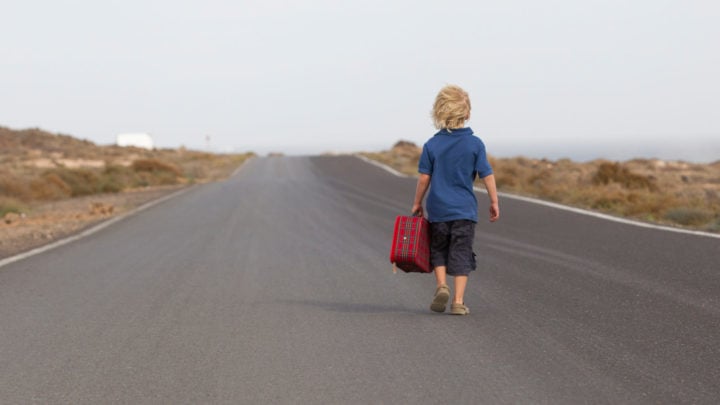 The boy told his dad he was leaving home. Source: Getty.

A man scolded his son for being so unruly and the child rebelled against his father. He got some of his clothes, his teddy bear and his piggy bank and proudly announced: “I’m running away from home!”

The father calmly decided to look at the matter logically. “What if you get hungry?” he asked.

“Then I’ll come home and eat,” bravely declared the child.

“And what if you run out of money?” asked the father.

“I will come home and get some,” readily replied the child.

The man then made a final attempt: “What if your clothes get dirty?”

“Then I’ll come home and let mummy wash them,” was the reply.

The man shook his head and exclaimed: “This kid is not running away from home, he’s going off to university!”

A police officer waited outside a bar

A police officer waited outside a popular bar, hoping for a bust.

At closing time everyone came out and he spotted his potential culprit. The man was so obviously inebriated that he could barely walk. He stumbled around the parking lot for a few minutes, looking for his car.

After trying his keys on five other cars, he finally found his own vehicle. He sat in the car a good ten minutes, as the other patrons left. He turned his lights on, then off, wipers on, then off. He started to pull forward into the grass, then stopped.

Finally, when he was the last car, he pulled out onto the road and started to drive away.

The officer, waiting for this, turned on his lights and pulled the man over. He administered the breathalyser test, and to his great surprise, the man blew a 0.00.

The patrolman was dumbfounded. “This equipment must be broken!” he exclaimed.

“I doubt it,” said the man. “Tonight I am the designated decoy!”

A woman wanted to give her husband a hint

Last year, when the power mower was broken and wouldn’t run, a woman kept hinting to her husband that he ought to get it fixed, but somehow the message never sank in. Finally she thought of a clever way to make the point.

When the husband arrived home that day, he found her seated in the tall grass, busily snipping away with a tiny pair of sewing scissors.

He watched silently for a short time and then went into the house. He was gone only a few moments when he came out again. He handed her a toothbrush. “When you finish cutting the grass,” he said. “You might as well sweep the sidewalks.”