Daily Joke: A man and an ostrich walked into a restaurant 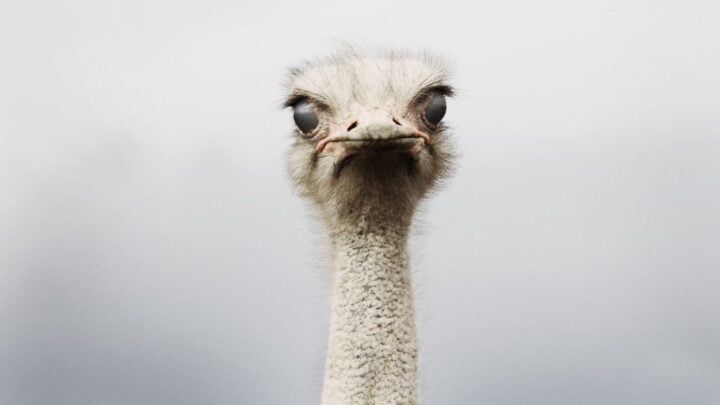 "I'll have the same," says the ostrich. Source: Getty.

A man walks into a restaurant with a full-grown ostrich behind him. As he sits, the waitress comes over and asks for their orders.

The man says: “I’ll have a hamburger, fries and a coke,” and turns to the ostrich, “What’s yours?”

“I’ll have the same,” says the ostrich.

A short time later the waitress returns with the order. “That will be $6.40 please,” and the man reaches into his pocket and pulls out the exact change for payment.

The next day, the man and the ostrich come again and the man says: “I’ll have a hamburger, fries and a coke.”

And the ostrich says: “I’ll have the same.”

Once again the man reaches into his pocket and pays with exact change. This becomes a routine until late one evening, the two enter again.

“The usual?” asks the waitress. “No, this is Friday night, so I will have a steak, baked potato and salad,” says the man.

“Same for me,” says the ostrich.

A short time later the waitress comes with the order and says, “That will be $12.62.”

“Well,” says the man, “several years ago I was cleaning the attic and I found an old lamp. When I rubbed it a genie appeared and offered me two wishes. My first wish was that if I ever had to pay for anything, I would just put my hand in my pocket and the right amount of money would always be there.”

“That’s brilliant!”says the waitress. “Most people would wish for a million dollars or something, but you’ll always be as rich as you want for as long as you live!”

“That’s right. Whether it’s a gallon of milk or a Rolls Royce, the exact money is always there,” says the man.

The waitress asks: “One other thing, sir, what’s with the ostrich?”

The man sighs, pauses, and answers: “My second wish was for a tall chick with long legs who agrees with everything I say.”

A young woman went to the doctor

A young woman said to her doctor: “You have to help me, I hurt all over.”

“What do you mean?” said the doctor.

The woman touched her right knee with her index finger and yelled: “Ow, that hurts!”

The doctor took a second to examine the woman before standing back and making his decision.

Two elderly women were driving in their car

Two elderly women were out driving in a large car. Both could barely see over the dashboard. As they were cruising along they came to an intersection. The stoplight was red but they just went on through. The woman in the passenger seat thought to herself: “I must be losing it, I could have sworn we just went through a red light.”

After a few more minutes they came to another intersection and the light was red again and again they went right though. This time the woman in the passenger seat was almost sure that the light had been red but was really concerned that she was losing it. She was getting nervous and decided to pay very close attention to the road and the next intersection to see what was going on.

At the next intersection, sure enough, the light was definitely red and they went right through and she turned to the other woman and said: “Mildred! Did you know we just ran through three red lights in a row! You could have killed us!”

Mildred turned to her and said: “Oh, am I driving?”