Here’s how long meat can stay frozen without spoiling 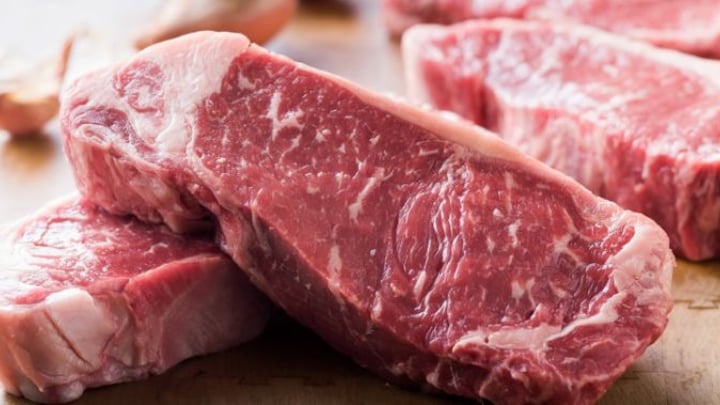 Freezing is the best way to keep meat fresh for longer. Source: Getty

Freezing is the best way to keep meat fresh for longer, but how long can meat stay frozen and still be safe to eat?

Food stored at -18°C is safe to eat indefinitely, but while it won’t make you sick, it probably won’t taste the best if left for a long time, Food Standards Australia New Zealand spokesperson Lorraine Haase explains.

Meat and poultry only retain their nutritional content when stored correctly, and while you can store meat in the original package, longer storage requires a little more work but gives better results.

“Ideally you should have a special (insulated) bag to keep products like meat cool on the trip between the supermarket and home,” Haase said.

Haase says it’s also a good idea to separate meat products from other products (especially ones you aren’t likely to cook), “in case meat juices drip on these other products”.

If you’re planning on freezing the meat it’s best to get it into the freezer as soon as possible, Haase advises. Try wrapping the meat in plastic wrap and then resealable freezer bags to avoid air contamination, she says. For extra protection, place the wrapped meat in an air-tight container. A great tip is to label the containers by date, so you can use the older meat first.

“Never overfill your freezer with food, so that cold air can circulate properly and keep the temperature steady,” she adds.

So how long can meat stay frozen and still be safe to eat?

According to FoodSafety raw steaks are safe to freeze for as long as 12 months, but for optimum condition, don’t leave them in the freezer longer than four months – the same goes for roasts. Chops can be frozen for four to six months, bacon for a month and raw sausages for one to two months.

Whole chickens and turkeys can stay in the freezer up to one year, while chicken and turkey pieces should be consumed within nine months.

When freezing a fish, its freezer longevity depends on whether it’s a lean or fatty fish. According to US Food and Drug Administration, lean fish including cod, flounder, bass, catfish and tuna can be frozen for up to six months, however the Australian government says four months maximum is best. As for fatty fish, including sardine, anchovies and salmon, both agree that they shouldn’t be frozen for more three months.

Minced meats such as beef, lamb, pork, turkey and veal will stay fresh in the freezer for three to four months, the FDA says, but according to the Australian government, two to three months is the maximum.

Keep in mind that there’s a major difference between ‘safe to eat’ from ‘good to eat’. If you defrost a piece of meat that doesn’t look or smell right, consider tossing it.

How long do you freeze your meat for? What are your thoughts on this?