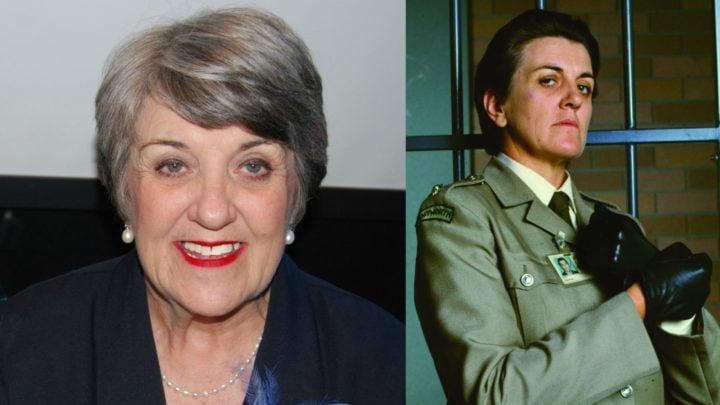 Maggie Kirkpatrick has opened up about the hardships faced throughout the acting career.

Maggie Kirkpatrick is the first one to admit that her life hasn’t been a bed of roses, with a widely publicised court case and battle with alcohol and drugs adding to the stress. And now, opening up about the roller coaster journey, the talented actress has claimed there were moments when it felt as if her world had truly come “crashing down”.

From being wrongfully perceived as an angry villain like her on-screen character Joan ‘The Freak’ Ferguson in popular TV show Prisoner, to having all eyes on her after being wrongfully accused of sexual assault, Maggie admitted in an exclusive chat with Starts at 60 that it hasn’t been easy. And now, for the first time, the actress has put pen to paper and shared her story in a new book titled The Gloves are Off, revealing to the public who Maggie Kirkpatrick really is away from the program which helped her rise to fame.

While being in the spotlight certainly has its benefits, it evidently led to one of the worst times of the 78-year-old’s life when in 2015 she was charged with child sexual assault against a 13-year-old girl in the 1980s. Maggie ended up appealing the case and won, with the charge consequently dropped but the pain of the case being spread across televisions and newspapers throughout Australia had already taken its toll.

During the period, many media outlets chose to use pictures of Maggie from Prisoner in reporting the case, with the actress describing their actions as completely “unspeakable”. Chatting to Starts at 60 about the difficult time, the grandmother said she struggles to trust anymore after being put on display in such a way by those she thought had her back.

“I had always had very good relations with the press and I found that unforgivable,” she explained. “It was Joan Ferguson who was on trial by the media and worst of all there was a segment on the news which featured a scene from Prisoner of Joan in handcuffs with two policemen that had nothing to do with Maggie Kirkpatrick.

“It was that sort of thing that really got up my nose and I have no trust in the media since. I am just wary of everything and wary of people as well. It’s my fault for having been such an open book all my life so that was then and this is now.”

The fact she was found guilty in the first place was as Maggie explained, “the greatest shock of all”, but thankfully she did have a team of support around her who were determined to see justice served. Thanking the young and old for rallying around her, the actress explained: “It was particularly painful for my family, but as I’ve said a number of times, without my family and my friends, and in particular my fans I don’t think I would have gotten through it.” Adding: “That was then, this is now.”

Aside from the court case, Maggie also fought her own personal demons years before as she battled excessive use of alcohol and drugs. Like many others in the spotlight, the actress fell through the cracks as the added pressures of fame led her astray.

Though she said the use of the word addiction was a bit melodramatic, as she was still able to function, Maggie admitted she did have a problem. “Sometimes when the work load is heavy and you work hard, you tend to play hard,” the grandma explained. “I think there are probably a lot of people who’ve been in this business that I’ve been in, who have faced similar situations. There are huge advantages to being employed but you know there are a lot of temptations and a lot of freedoms that come with it and you come crashing down.”

Maggie touched on this in her book, with a chapter aptly titled “The year I would rather forget”. The actress said it felt as if she was on a continous treadmill filled with “work, play, substance abuse and an agonising private life”. While later on in the book she referenced 1988 as “another year best forgotten” with most of it playing out in an “alcoholic haze”.

This and an unhealthy relationship filled with violence and tears proved difficult for Maggie who ended up in a clinic to help her beat the excessive drinking and drugs. Unlike others who have continued on a downward spiral with substance abuse taking over their lives, the actress said for her it was an up and down battle with people rallying behind her to pull her out of the slumps.

“It wasn’t just one thing, it was up and down and up and down,” she explained to Starts at 60. “I was given help by people, by agents and professionals and you just dust yourself off and get going again.”

And that’s exactly what Maggie has done, pulling herself out of the hardships and onto happier horizons. Stepping away from acting and opting to spend most of her days enjoying family time with her daughter, grandson and great-granddaughter, the actress is relishing in her life now.

Amongst that, she began writing her book, with Maggie claiming after much nagging from those around her it was time to tell her story, mistakes and downfalls included. “Life isn’t all a bed of roses for most people and so why gloss over it,” she explained.  “We all make mistakes, we need to admit to them. We have our likes, our dislikes and we have our crosses to bear, there’s no point in pussy footing around.”

Maggie Kirkpatrick’s new book, The Gloves Are Off, is now available by New Holland Publishers for $32.99 from all good book retailers or online here.

Are you a fan of Maggie Kirkpatrick? Do you remember watching her in Prisoner?