A Country Practice: Where are the cast now? 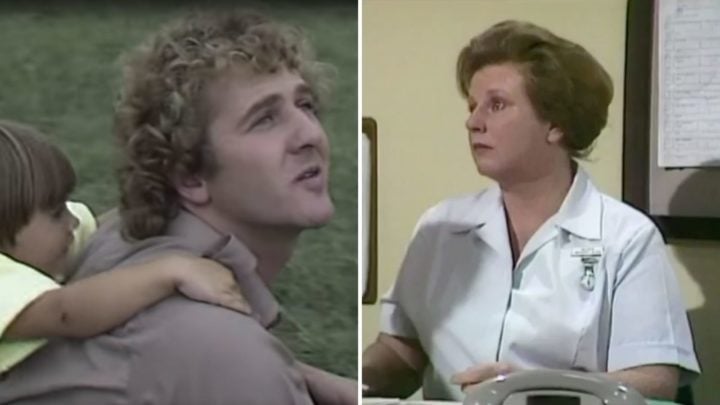 Starts at 60 is looking at where some of A Country Practice's biggest stars including Shane Withington (left) and Joan Sydney are now. Source: YouTube.com/TVMovieBits and chevyxwon

Ask any Australian who lived through the 1980s and ‘90s what the most iconic show on TV was and chances are they’d tell you A Country Practice. The soap opera aired more than 1,000 episodes between 1981 and 1993 and followed the lives of some beloved characters in the fictional New South Wales suburb of Wandin Valley.

Each week, viewers would tune in to find out what was happening across the town’s hospital, vet, RSL and police station, with the show winning 29 Logies over its run. Starts at 60 is looking at where some of the most iconic cast members are now. However, sadly, some of the most beloved stars from the show have passed away.

Grant Dodwell played Dr Simon Bowen for six years on the beloved soap. The episode where he married Penny Cook’s character Vicky Dean went on to become one of the biggest episodes in the show’s history and made both actors two of the biggest stars in Australia at the time.

Now 67, Dodwell has appeared in an array of other TV projects since his stint on A Country Practice including Water Rats, Packed to the Rafters and Home and Away. He was interviewed on the Daily Edition earlier this year where he explained he was doing theatre and was working on a project that brings stage plays to the big screen.

He also opened up about how his beloved co-star Cook acted on set and remembered her as a funny woman after she died earlier in 2019. He also recalled their iconic wedding episode, noting they celebrated over a bottle of warm champagne with the rest of the cast and crew.

Molly Jones’ death on A Country Practice remains one of the saddest in Australian TV history. Molly was played by Anne Tenney and the character tragically died after a 10-week leukaemia battle in 1984.

Around 2.2 million people watched Molly’s death episode, making it one of the year’s biggest TV events. Fans will recall Molly was the wife of Wandin Valley Hospital nurse Brendan Jones, played by Tenney’s real-life husband Shane Withington, as well as being mother to Chloe and parent to Doris the alcohol-loving pig.

Before she was taken down in her prime by leukaemia, Molly had already lost a baby and had fallen off a ladder. Tenney went on to appear as Sal Kerrigan in the iconic Aussie film The Castle and appeared in an array of other popular Australian shows including Always Greener, All Saints, Headland and Cliffy.

During an appearance on The Morning Show in 2019, Tenney admitted fans still recognise her after all these years and that many people are surprised that she is married to Withington.

Georgie Parker played Lucy Gardiner on the hit show and despite her character not being introduced to audiences until 1989, she became one of the most popular stars. Lucy was a nurse who worked at the hospital and was known for her love of animals and bicycle riding. She ended up marrying Matt Tyler and after trying for ages to have a baby, the couple finally welcomed their son, James, in 1992.

Of course, Parker has gone on to become one of Australia’s most recognisable stars and currently stars as Roo Stewart on Home and Away. Speaking to Starts at 60 in 2018, Parker explained that she didn’t know if A Country Practice would make a return to Australian screens.

“I was very connected to All Saints and A Country Practice and the idea of revisiting these characters is extremely tempting, however, I think it is also really important to keep moving forward with drama,” she said. “I think it is important to come up with new and fresh ideas, but I think from a sales point of view, it is very reassuring to the network and to investors because they know that they have already got a built-in audience.”

She added that she would make an appearance as Lucy if she was ever asked.

Brendan and Molly Jones captured Australian families’ hearts on A Country Practice through the 1980s and ’90s and while they were loved by audiences, Withington’s character took a turn for the worse when Molly passed away. Fans will recall Brendan became a drunk and lost his job, but was still a father to daughter Chloe.

Of course, Withington would go on to bigger and better things. In addition to appearing in films Black Tulip and Strange Bedfellows, he’s appeared in a string of other iconic Aussie shows including The Flying Doctors, Dog Head Bay and Home and Away – which he currently appears on as John Palmer.

Speaking to Starts at 60 in 2018, the 61-year-old explained that he and Tenney kept their romance a secret. He explained: “We kept it under our hats, no one really knew.

Joan Sydney brought iconic character Maggie Sloan to life on A Country Practice. Viewers fell in love with the character who moved to Australia from London and became a nurse.

While other characters were known for their sweetness, Maggie was notoriously bossy and had a very particular way of running the hospital. Of course, Maggie’s time in Wandin Valley didn’t come without drama. She suffered a heart attack in one dramatic episode and was stabbed in the neck in another.

Sydney is now 80 and in addition to appearing in a string of theatre productions, has continued to work on a variety of shows. Her most recent TV appearance was in 2013’s Miss Fisher’s Murder Mysteries and she also appeared as Valda Sherrgold on Neighbours.

Who was your favourite character on A Country Practice?