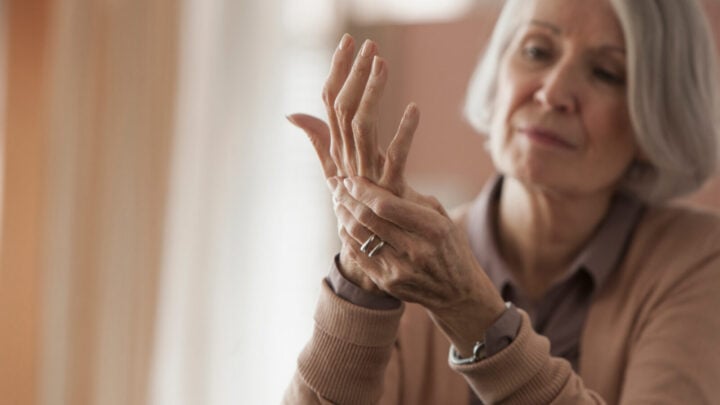 According to Arthritis Australia, 3.6 million people are navigating through life with arthritis, with the number of those impacted by the condition expected to grow to 5.4 million by 2030.

With over 100 types of arthritis, the joint disease can have a myriad of negative impacts on a person’s quality of life.

Registered Nurse Claire Dunkley of Holistic Health Cluzie Clinic told Starts at 60 that the condition is often described as “inflammation of the joints” and can make simple tasks and movements painful for those affected by the condition.

“If you have arthritis, or a breakdown of the tissue within the joints, the joint will have less range of motion,” Dunkley said.

“You lose your range of motion and dexterity which means your muscles eventually break down and you become weak.”

This painful condition is a leading cause of chronic pain, resulting in age-related disabilities and premature retirement, mostly affecting Baby Boomers.

NEW census data has dropped, did you know? Baby boomers are more than twice as likely to report having arthritis as the general population. Read the report here: https://t.co/lETW97Zy2y @ABSStats #2021CensusDataAU #arthritis

Dunkley explains that arthritis can have significant impacts on a person’s quality of life.

“You can’t enjoy life in the twilight years where you don’t have to work for a living and you’re out and about trying to enjoy yourself. When all of a sudden, your body doesn’t allow you to do that,” she said.

“And the pain can completely change the personality of the person as they become depressed.”

In order to get on top of and remedy the agonising condition, the first step is to work out what form of arthritis you have.

There are three major forms of arthritis affecting everyday Australians:

The most prevalent form of arthritis, osteoarthritis (OA), most commonly affects the knees, hips, finger joints, and big toe. It can be felt across the joints, bones, cartilage, ligaments, and muscles of the affected area.

Often associated with joints overworking to repair themselves from being overweight or carrying out repetitive movements; symptoms of OA begin to slowly build up in severity over time.

Symptoms vary from person to person and may depend on the area affected, however, common symptoms can involve stiffness, clicking sounds from joint movement, and grating sensations.

OA is likely to affect a person’s ability to do simple tasks such as opening jars or bottles and walking.

Rheumatoid arthritis (RA) is an autoimmune disease that targets the lining of the joints, causing inflammation and damage, and is most often found in smaller joints such as hands and feet.

Symptoms of RA include stiff, painful, swollen, and tender joints, and are often mimicked on both sides of the body (e.g both hands).

It is most common in smokers and those with a family history of RA.

Whilst there is no cure for RA, early diagnosis and modern medicine have been proven to have great results on those living with the condition, limiting further joint damage.

Caused by a build-up of uric acid in joints, in the form of crystals, gout is a common but agonizing form of arthritis.

Usually, our bodies would dispose of uric acid via the kidneys, however, people suffering from gout don’t have the ability to process this form of natural waste fast enough.

The build-up of crystals often results in swelling, inflammation, and tender joints. If left untreated, gout will continue to worsen and cause permanent damage to a person’s joints.

Gout tends to move fast, usually overnight, and sufferers of this diagnosis often find the joints of their big toe, hands, wrists, knees, ankles, and elbows swollen, red, and painful to move.

This form of arthritis is prevalent in people who are overweight, have high cholesterol, high blood pressure, glucose intolerance, have kidney disease, or those taking diuretics.

While many people affected by arthritis aim to treat the affliction non-surgically, with pain relief medications and the support of their doctors, orthopaedic surgeon Dr Martin Lowe said surgery can be life-changing for those with an advanced condition.

“Surgery can give them pain relief as well as increased mobility and return to normal function,” Dr Lowe said.

“Joint replacement surgery should be offered to patients who have tried other ways of managing their arthritis with no success, for example, medication, exercise therapy, etcetera.”

Dr Lowe said the recovery period can be lengthy, however, the results can improve quality of life.

“The recovery period after having joint replacement surgery is usually only 2-3 days in the hospital, however, some patients can be home recovering that same day and from there usually an additional six weeks till they can return to normal function,” he said.

“It is important to work with the patient to ensure they receive the best outcome from the surgery.

“I recommend my patients work with allied health professionals whether that be physiotherapy, podiatry, or occupational therapy, both pre and post-surgery, to ensure they are reaching their own personal goals and receiving adequate rehabilitation support.”

For non-surgical remedies, there are an array of supplements that can offer some relief.

Although there’s no cure for arthritis, adding these supplements to your diet may help ease the symptoms and could offer some much-needed relief, Dr Ron Goedeke from Appearance Medicine & Wellness Centre explains.

Turmeric contains a molecule called curcumin which has become widely recognised as a great anti-inflammatory, according to Goedeke.

Goedeke explains that it works by helping to reduce inflammatory cytokines (small proteins) which act as an inflammation messenger that causes pain in arthritis sufferers. He adds: “Curcumin is effective at preventing joint inflammation too.”

Astaxanthin is a powerful antioxidant and anti-inflammatory that helps control oxidative stress. This supplement is great for reducing body-wide inflammation and has proven to slow down cartilage degradation.

“As a relatively new discovery and product, most of the Astaxanthin studies to date have been done in animals but the results have been so good that human studies are happening now,” Goedeke explains.

“This is a naturally occurring compound in the body that acts as an anti-inflammatory and pain reliever,” Goedeke explains.

Our body uses SAM-E to create chemicals that play a role in pain and inflammation.

“It also shows further promise as a great arthritis supplement with its potential to encourage cartilage growth,” he adds.

Although CBD oil isn’t easily accessible yet, Goedeke says it definitely will be in the near future. In Australia, it is prescription only and acts as an extremely powerful anti-inflammatory and pain controller.

The cannabinoids, found in the supplement, directly influence our endocannabinoid system, a series of receptors throughout the entire body.

“The endocannabinoid system has a direct relationship to pain and inflammation,” he explains.

In a bid to help ease the effects of arthritis, Starts at 60 readers who have first-hand experience with the condition offered their best home remedies to deal with pain and inflammation.

Medical expert Dr Vivek Eranki told Starts at 60 that when patients are considering home remedies “the most important thing is they need medical input.”

“Funnily enough, GPs are actually very well versed with the home remedies out there and they would be able to guide the patient,” he said.

“Home remedies come in many different shapes and sizes,” shared Dr Eranki, although he warned to not take a home remedy without first running it past your GP.

One member swears by “eating cherries” when it comes to alleviating the painful symptoms of arthritis.

“Every Christmas I can go without pain medication for 3 weeks because I eat cherries. I also try to eat an anti-inflammatory diet with very few carbs or sugar and no milk,” they said.

Eranki concedes that “fruits and vitamins do have anti-inflammatory properties.”

“But cherries, I’m not too sure about that,” he said.

“I think, especially during the holiday season, that’s probably got to do with other diets that they are consuming at the same time.”

Apple Cider Vinegar is often considered the holy grail of home remedies with claims it can help lower blood sugar, kill weeds in the garden, and can even serve as an all-purpose cleaner around the house. But can it help with inflammation associated with arthritis?

“My parents lived well into their 90’s and never had arthritis thanks to this mixture,” the reader said.

However, Eranki refutes some of the fantastic claims made around Apple Cider Vinegar, claiming it’s “probably not grounded in fact.”

“I haven’t come across anything nor have I read about it favourably in any medical journals,” he said.

Omega-3 is a type of fat that not only plays an important role in maintaining overall good health but can also reduce inflammation caused by arthritis.

According to Arthritis Australia, “current research suggests omega-3 fats are helpful for people with inflammatory arthritis, such as rheumatoid arthritis, ankylosing spondylitis and psoriatic arthritis. There is also some evidence that fish oils may help control symptoms of osteoarthritis.”

Given our bodies can’t produce Omega-3 on their own it’s essential we obtain them from our food, which one commenter with osteoarthritis did in order to alleviate their symptoms.

“I have osteoarthritis in my spine and both knees, but I find eating salmon and taking fish oil tablets helps with inflammation and lubricant for joints, but I need to keep moving also,” the commenter said.

Consuming salmon and fish oil tablets receive the tick of approval from Eranki who considers them “very important because of their anti-inflammatory properties.”

“There’s been some anecdotal evidence that apparently some of the proteins have a similar characteristic to the synovial layer of your joint which produces the shock-absorbing fluid, when they looked at the research they found it was because of the anti-inflammatory properties of the fish,” he said.

Exercise can benefit arthritis sufferers by improving their mobility and helping to decrease pain and stiffness. One Starts at 60 reader considers exercise as the “best medicine.”

“Move it or lose it, so the saying goes,” they said.

“But in actual fact, it really does work together with a daily dose of magnesium and glucosamine. I have chronic arthritis in my shoulder, back, and feet so I take myself off to the gym 4 x weekly.”

Eranki said exercise plays a “huge part” in the management of arthritis.

“Exercise and movement themselves have been found to be useful, proper movement is actually very protective for the joints,” he said.

“Exercise and movement are probably one of the best things that people can do for their health.”