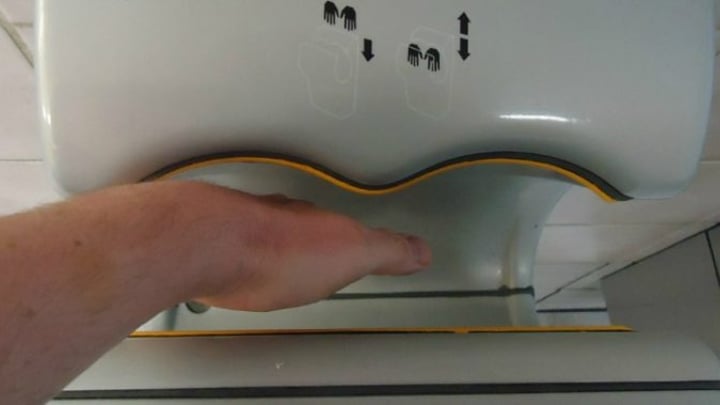 Do you dry your hands in public bathrooms? Source: Wiki Commons

From a young age, most people are taught to wash and dry their hands after using a bathroom.

Public bathrooms can be disgusting at the best of times, yet one scientist wanted to find out just how clean her hands would really be after drying them with a dryer. The results were so disturbing that she posted a photo to social media. It has now gone viral. Sharing a gruesome picture, Nichole Ward, from California, wanted to show her friends and followers just how unhygienic the dryer was.

“Ok guys.. ready to have your mind blown?!” she asked. “This here, is what grew is a Petri dish after just a few days. I stuck the open plate in an enclosed hand dryer of a public bathroom for a total of 3 minutes. Yes 3 only.”

She then issued a startling warning. “DO NOT EVER dry your hands in those things again,” she said. “This is the several strains of possible pathogenic fungi and bacteria that you’re swirling around your hands, and you think you’re walking out with clean hands. You’re welcome.”

She said he post wasn’t intended to scare people, but rather to make them aware of what is happening. According to ABC Action News, electronics company Dyson, who made the hand dryer in question, issued a statement in response, saying they were shocked by the findings.

“We’re very surprised to see these results, and unclear on the methodology employed,” a spokesperson from Dyson said. “All Dyson Airblade hand dryers have HEPA filters that capture particles as small as bacteria from the washroom air before it leaves the machine. Dyson Airblade hand dryers are proven hygienic by university research and are trusted by hospitals, food manufacturers and businesses worldwide.”

Hand dryers aren’t the only hotspots for germs though.

According to RD, many restaurants appear clean, but are a breeding ground for germs. The website says menus, salt and pepper shakers and even bottles of sauce aren’t always cleaned between customers. This means that anyone who’s touched the items could be passing on potentially harmful bacteria that ends up all over your hands.

While reusable shopping bags do wonders for the environment, they can be a breeding ground for an array of bacteria including E. Coli. Research by the University of Arizona and Loma Linda University found that just 3 per cent of people actually wash or clean their bags, while 75 per cent don’t actually have specific bags for raw meats, cooked goods and vegetables, opening them up to cross-contamination.

Shopping trollies are also potential hotspots for nasty germs, with hundreds of grimy hands and fingers touching the handle bars between cleans. The same goes for the conveyer belt at the checkout, so you might want to think twice before plonking down your unbagged fruit and vegetables.

One of the germiest items of all though is the mobile phone. According to Time Magazine, a phone is actually ten times dirtier that a toilet seat, mainly due to the fact that people carry their phones everywhere from the cinema to dinner and even hospitals. Their solution is to wash your hands regularly throughout the day, clean your phone with a microfiber cloth and try to limit the use of your phone in certain areas to avoid contamination.

Your remote control could also be crawling with bacteria, because, let’s face it, who can actually be bothered to clean the damn thing? Other germy areas around the house include, cupboard handles, the kitchen sink, light switches.

It’s enough to make you want to bleach the whole house!

What do you think? How regularly do you wash your hands?