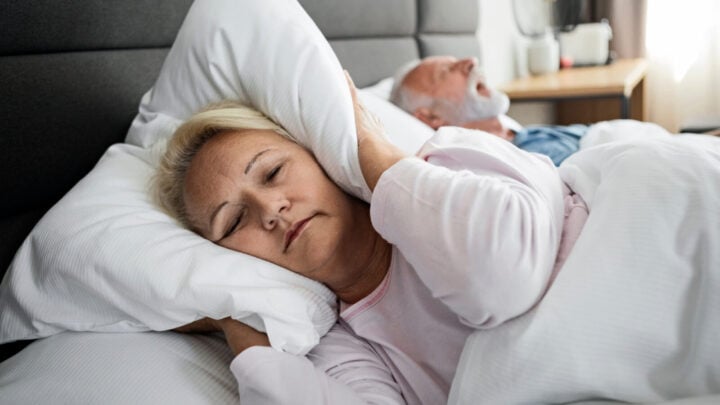 A new study has revealed the mental and physical impact snoring can have. Source: Getty Images.

A new study has shed light on the physical and mental impact of snoring, revealing Australians are losing almost three nights a week of sleep because of the disruptive issue.

The 2022 Annual Global Sleep and Snoring report found that of the 2000 Australians surveyed, 49 per cent admitted to snoring while 51 per cent accused their partner of snoring.

Men were the biggest culprits making up 56 per cent of snorers compared to 43 per cent of women.

More alarmingly the study revealed 29 per cent of Australians said snoring disturbed their sleep, with those surveyed losing 2.9 nights of sleep to snoring per week.

Sleep Expert Olivia Arezzolo told Mute Snoring, who commissioned the study, that “the stress hormone cortisol can increase by 37% after just one night of insufficient sleep, leaving you feeling anxious, wired and unable to switch off”.

“In addition, beta amyloid, a neurotoxin that contributes to brain fog, memory loss and even Alzheimer’s disease, increases by 5% after 2 nights of inadequate sleep. And, of course, fatigue – which single-handedly contributes to 20% of motor vehicle accidents,” she added.

In addition to the detrimental health effects brought on by lack of sleep, snoring can also lead to flow-on effects that can disrupt the sufferer’s day to day life. Medical expert Dr Vivek Eranki said, “sometimes people wake up with headaches and chest pains”.

The survey also revealed 22 per cent of Australians argued about snoring on three or more occasions each month.

Relationship expert Debbie Rivers highlighted several important factors to consider when broaching the subject of a partner’s snoring and the strain snoring can have on a relationship.

If discussing the matter doesn’t work then the survey also found the novel ways partners of those who snore have resorted to in order to get a decent night’s sleep with 43 percent admitting they have kicked or nudged their snoring partner. Simply waking their partner up was the go to method for 30 per cent of those surveyed and sleeping in another room was the choice for 25 per cent.