Kay shares her new lease on life after her cochlear implant 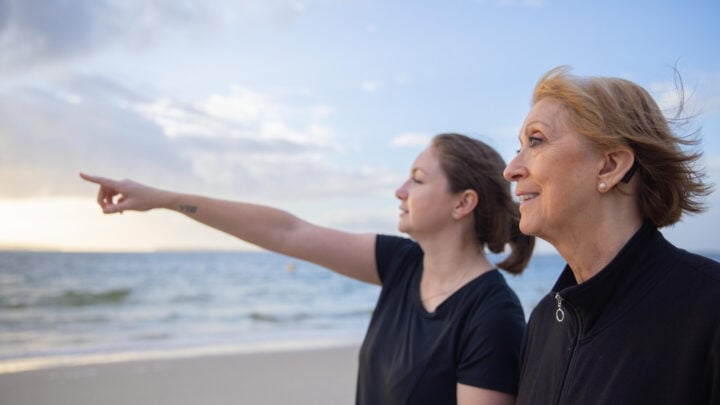 Hearing loss does not mean you have to miss out on doing the things you love. Image: Cochlear

A person’s 60s are considered their golden years, a time to enjoy yourself, start a new hobby and make the most of your newfound free time. Ensuring a healthy quality of life is crucial in order to be able to enjoy this lifestyle because as you age the number of health ailments can increase alongside the need for regular medical testing and check-ups. One such health check that can often get overlooked is hearing.

Hearing loss is a common problem that can become more prevalent with ageing. When left untreated hearing loss can make it difficult for sufferers to interact with the wider world and communicate with friends and family.  Kay’s longtime hearing loss made communication with her family and friends difficult causing her to all but give up on finding a solution until she received her cochlear implants.

Don’t miss out on the life you love

Kay had struggled with hearing loss for much of her life, forced into “relying on lip reading” to effectively communicate with those around her. She was not diagnosed until later in life after a frustrating series of doctor’s visits to remedy her situation proved to be fruitless.

“I was diagnosed in my thirties with hearing loss but I had had hearing loss for a lot longer before that,” she said.

“I had been to several doctors starting in my early twenties, and I was told it was either hay fever or stress.

She was eventually diagnosed with “severe hearing loss” and was prescribed hearing aids which provided little respite from her “deteriorating” hearing ability.

“They had been great but because my hearing was so bad, basically sounds just became like mush, so I wound up with about 4% hearing with a hearing aid in one ear and that was my good ear,” she explained.

“My hearing was just deteriorating at such a rapid rate that they really didn’t last long.”

It wasn’t until an audiologist recommended she go see a surgeon that Kay felt heard for the first time and with the promise of a cochlear implant her life was to take a dramatic turn for the better.

“I remember just sitting with him and he was such a lovely man, so compassionate, and spoke to me and listened to me, which is the first time anyone had ever done that,” she said.

“He just said ‘look you don’t have any other option but to have a cochlear implant.’

“I said ‘oh…’ and he said ‘what’s wrong?’ and I said ‘well, I knew eventually it would get to something like this, but I thought it would be later, rather than sooner.’

“And he said ‘why?’ and I said ‘just that technology improves as the years go by.’ And he said ‘no, no, no’, once we get the hardware in your head, we just have to upgrade the software.’ So I went, ‘oh yeah that sounds pretty good.’

With that simple act of reassurance from her surgeon Kay was really keen to come in and get it done.

“He said ‘look most people just get one and they’re happy with that so we’ll do the worst side first’ and it was just like it couldn’t come fast enough” she explained.

“It was just unbelievable. It was such a great process because it was so easy. It wasn’t painful, it was an overnight stay.”

Invented by Australian icon and living legend, Professor Graeme Clark, the multi-channel cochlear implant is an electronic medical device that replaces the function of the damaged inner ear.

A cochlear implant works by replacing the function of the damaged sensory hair cells inside the inner ear, providing sounds direct to the brain. Almost 40 years since the first commercial Cochlear implant, the technology has continuously evolved and it’s thanks to these developments that Kay has been able to hear the world once more.

Cochlear has been bringing people from all walks of life into the world of sound. Professor Clark saw firsthand the isolation and frustration that comes from living in a world of silence as his father struggled with hearing difficulties.

Now, Professor Clark’s legacy lies in the incredible accomplishments of recipients around the world, who live rich and fulfilling lives thanks to cochlear implant technology.

Unlike hearing aids, which make sounds louder, cochlear implants do the work of damaged parts of the inner ear (cochlea) to provide sound signals to the brain through two parts; the external sound processor and the implant which the surgeon inserts under the skin attached to an electrode array that will sit in the patient’s inner ear.

A new lease on life

Kay was 58 years old when she received her first cochlear implant, with the results proving to be “unbelievable.”

“I went to over 80% hearing on the first day. I literally drove in not being able to hear the radio, and then drove home listening to Richard Glover on the radio. It was just… it was beyond my wildest dreams that I’d be able to hear like this… I’d never heard like that!” she recalls.

“Now my day starts as soon as I put my cochlear implants on.

“They just bring me so much joy. And I have complete and utter control from the minute I wake up to the minute I go to bed because that’s when I take them off.

“I never, ever thought that at 58 that I would ever hear better than I did in my twenties.

“It is so clear, it is so concise, it is just… it is just beautiful. And music was such a bonus for me.”

More than anything else, being able to reconnect with her family proved to be the greatest gift as a result of her cochlear implant.

In Australia, 3.6 million people are affected by some form of hearing impairment and, by 2060, it is estimated that this will increase to 7.8 million.

More than 70% of cochlear implant recipients in Australia are adults.​

Dr John Rice OAM considers cochlear implants “a godsend” for those when ​conventional​ hearing aids are ​not​ enough.

“They enable young and old to have the chance to socialise and be an active member of society” he said.

If you or your loved ones are struggling to hear, or your hearing aids are no longer enough, the good news is there are more ways to improve your hearing than ever before – and it’s never too late. Take back control of your life and reconnect with the people and the life you love by considering cochlear solutions. Take the first step to better hearing here.

Are you or your loved one struggling to hear clearly?

Does someone you love struggle with hearing loss?