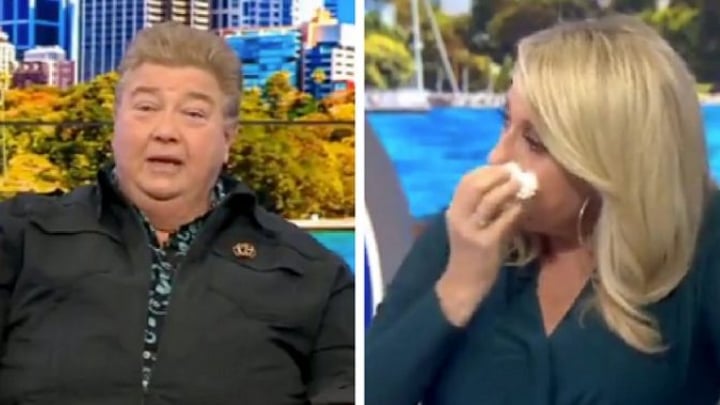 Jono Coleman left the entire panel of Studio 10 stars in tears as he opened up about his secret cancer diagnosis for the first time during an emotional TV appearance.

The 62-year-old Aussie entertainer revealed he didn’t tell his beloved wife Margot, or children Oscar and Emily, for several days as he struggled to come to terms with the news – and even worried he’d never be able to see his two kids grow up and start families of their own.

Opening up to presenter Sarah Harris, Jono revealed the terrifying moment he first found out he was suffering from aggressive prostate cancer and explained, by then, it that had even spread to his lymph nodes and bones.

“We were saying goodbye to a member of staff, a colleague, and I was supposed to go to the drinks at the pub after the Studio 10 Friday show – I never miss the drinks!” he joked.

“You guys were all at the pub and I had a man with his finger up my bottom. He said, ‘well I can tell you that your prostate is enlarged and there’s sort of a hard lump so I’d say you’ve got cancer’.”

.@jonocoleman hopes opening up about his cancer battle will encourage others to get a prostate test. #Studio10 pic.twitter.com/EtKNO7wgwc

He added: “People say your life starts flashing before you, there was a touch of that. I thought ‘what am I going to do, we’ve got the kids, we’ve got Oscar and Emily’.”

Jono admitted he didn’t even tell his wife of 28 years when he was first diagnosed, and asked how he eventually broke the news to her and their kids, he said: “It’s almost a bit of a blur.”

He revealed he spoke to Margot first over the phone to explain he’d been for a check-up, but said it was likely nothing to worry about and they just needed to do a biopsy. He didn’t break the news to her until the following weekend.

“In your own mind, and with your partner, you talk to yourself and say ‘right, we’re going to get this’,” he admitted.

While Margot agreed they’d fight it, Jono said he could tell inside her “there was a 17-year-old screaming”. Meanwhile, his two children handled the news exceptionally well and managed to find a light-hearted response for their father – even asking him if there would be a funeral.

The TV star did eventually consider the possibility he wouldn’t see his kids again, should the worst happen, and explained: “I want them to experience all the things I’ve experienced and I want to be there for that.”

While Jono said he didn’t want to initially speak about his health battle, he did it for the sake of other men who may have to go through the same thing as him. He admitted his old GP told him he didn’t need a digital test, but if he hadn’t have had one himself, he may not have detected it when he did.

Our own @jonocoleman opens up about being diagnosed with advanced prostate cancer & why he kept it a secret. #Studio10 pic.twitter.com/kQt4aU8Oam

Shortly after the TV appearance, he spoke to Alan Jones on 2GB radio, revealing he’s just finished six months of intensive treatment and is urging men across the nation to get the digital examination, not just a blood test.

“I had a cold chill through my body and then I suddenly snapped out of it and said, ‘right what do we do, what do I need to do’?” He said of the moment he found out.

“I did the whole chemo thing whilst also doing Studio 10 every day and doing my radio show for Macquarie every night. I just decided I wanted to… continue as normal,” he added.

Now he’s urged all men to follow his lead to avoid them having to go through the same trauma, adding: “My message, I guess, to people and men all over Australia is ‘get yourself checked’. If you’re not happy with just the PSA test or the blood test, say I want a digital examination.”

Are you a fan of Jono? Do you have a message for him? Have you or a family member been diagnosed with prostate cancer?