InteliCare: ‘The homecare technology that saved my neighbour’ 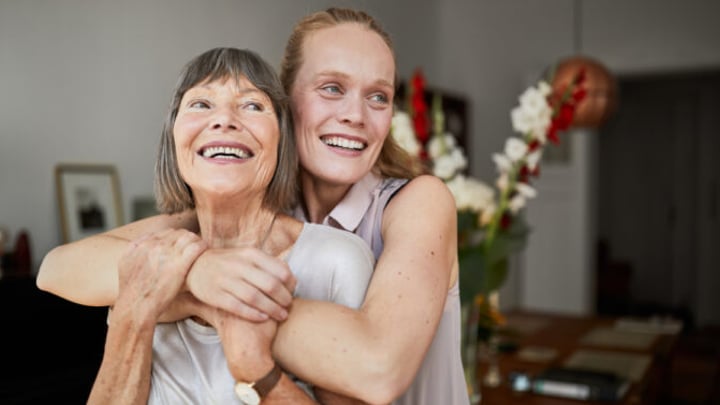 June* may have only been Caroline’s* next-door neighbour, but that didn’t stop her from speaking up for her wellbeing and independence. (Image source: Getty)

None of us like the thought of our parents growing old and finding themselves unable to take care of themselves.

We want to be able to support them to remain independent yet have the peace of mind that they’re safe. And one Aussie company, InteliCare, has come up with a smarter in-home solution allowing seniors and people with disabilities to live safely and independently in their own homes.

For 87-year-old June Smith, a combination of unfortunate events found her struggling to maintain the home she had previously shared with her late-husband for 28 years.

Neighbour and close friend, Caroline said nobody knew just how much difficulty she was having until the day she saw an ambulance in June’s driveway.

“We’d been neighbours for close to eight years and we’d all look out for June. She is quite a private person and very house-proud so although we supported and checked-in on her, none of us realised how much she was struggling,” she said.

“It took this incident for us to realise how isolated June had become from the community.”

A voice fighting to be heard

The ambulance in June’s driveway that morning had been called by community and health workers visiting her to conduct a care assessment.

“They said they were taking her up to the hospital just for a general check up but it quickly turned into a different situation when June was admitted to hospital and deemed to have no capacity to look after herself,” Caroline explains.

With no immediate family and no official advocate to speak for her, June was appointed a public guardian and trustee to make decisions on her behalf by the Queensland Civil and Administrative Tribunal (QCAT).

After a month in hospital, June was transferred to a residential care home under the guise of receiving respite care.

“June was always quite introverted, and it was heartbreaking to realise that in her time of need there was no-one interested in advocating for her wellbeing,” Caroline explains.

“The health issues June was experiencing could be directly related to an undiagnosed urinary tract infection and untreated sleep apnea. Once these were treated you could see her condition improve dramatically.

“I couldn’t sit by while June’s control over her life was taken away from her without any consent or thought for what was best for her. I had to speak up on her behalf and with June’s blessing applied for legal guardianship through QCAT.”

“Our aged members of society deserve much more.”

A simple ally helps to save the day

Caroline and her husband persisted, with June’s support, and were successfully granted legal guardianship of June.

And after a long ordeal, June was able to return home – to the place where she felt safe and herself.

“We were losing hope and worried that June wouldn’t be able to come home,” Caroline explains.

“We were being told that she would need 24/7 in-home care and didn’t know what that would look like. In some of the research I had been doing I came across InteliCare and it quickly became an ally in helping us win our fight to bring June home, where she would be able to thrive with love and support.”

To help June transition back to living at home, InteliCare sensors were put in every room and on key appliances. The discreet sensors register nearby movements, without the need for invasive cameras or microphones, and send the information to an app that carers can access via their smartphone.

The app provides carers with daily updates that everything is ok, while alerts indicate when there are potential problems that should be looked into.

The sensors allowed June to feel safe in her home while still maintaining her privacy and independence, while Caroline could be confident she would be informed if something was amiss in her friend’s home.

“With the support of InteliCare, June is able to look after herself and stay living in an environment that is familiar and comforting to her. I can see how she is going by using the app on my phone, which also gives June a sense of security knowing I’m only a few minutes away if something should happen.”

“The positive effect on her mental wellbeing after regaining her independence and routine has been phenomenal.”

After her experience with June, Caroline is urging other people with elderly neighbours to find ways to stay connected to them.

“Protecting your community is vital and finding a way to engage with your neighbours,” she said. “I would show her I cared by taking meals over that were easy for her to reheat or popping over when I saw she was outside to say hello.”

“The simple act of them being reassured someone cares and they’re not alone is so powerful.”

Likewise, Caroline strongly advocates for making sure all your affairs are in order.

“It’s never too early to make sure your legal paperwork is done and that the people you appoint to be a power of attorney genuinely care about you,” she says. “In June’s instance she lost her voice and the people who should have been on her side, advocating for her, dropped the ball and walked away. This happens far too often to too many people in our community.”

“It’s also important to keep on top of general medical checkups and build a strong relationship with your GP for that extra level of support and advocacy if you ever need it.”

*The names in this case study have been changed to preserve our clients’ privacy.

InteliCare is a registered NDIS provider and Home Care package assistive technology provider. To worry less and care more about someone in your life needing a helping hand at home, call InteliCare on 1300 00 145 (free call) or visit www.intelicare.com.au

Live at home without the worry from family.

Our 24/7 in-home smart sensors and app keep you connected to your loved ones, as well as detecting and helping to prevent falls and other health conditions, so your family don’t have to worry about you.

Do you care for an elderly parent or family member? Let us know