The 6 most common vision problems for over-60s 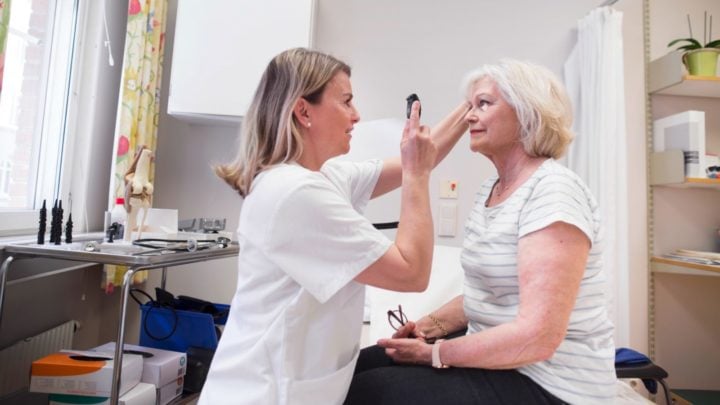 It is essential to have regular eye checks with an optometrist. Source: Getty

As you get older, your body undergoes a number of changes and while the most obvious signs may be external, such as greying hair and wrinkles, your eyes eventually succumb to the effects of ageing as well. In fact, around 440,000 Australians aged 55 and over are visually impaired.

So here is a list of the most common age-related vision problems to look out for, including how to treat them.

In short, presbyopia, otherwise known as ageing eyes, is an eye condition that affects your ability to focus on close-up objects or small print. It affects everyone (to varying degrees) with most people noticing the onset of symptoms by age 40. People with presbyopia often hold reading materials, such as newspapers, books and even mobile phones, at arm’s length. It’s also common for people to experience headaches or become tired while reading.

Presbyopia can be treated with reading glasses, glasses with bifocal lenses (when people need glasses for distance as well) or contact lenses. Depending on your condition and lifestyle, you might also consider surgery.

Age-related macular degeneration (AMD) is a leading cause of vision loss among older Australians. It typically leaves patients with declining eyesight in the central vision part of the eye. There are two main types of AMD; dry and wet. Dry AMD is the most common type and causes blurred or reduced central vision, while wet AMD is rarer and can develop very suddenly.

Vision Australia says the most common signs of AMD include a gradual decline in a person’s ability to see objects clearly, as well as distorted vision, dimming of colour vision and extra sensitivity to glare. Those most at risk of developing the age-related condition are people with a family history of AMD, people over the age of 75 and smokers.

One of the most common eye issues over-60s face is glaucoma. According to Glaucoma Australia it is the name given to a group of eye diseases in which vision is lost as a result of damage to the optic nerve. The damage is often caused by an irregular pressure in the eye.

Certain people are at higher risk than others, including those with a family history of the disease, people over the age of 40, people from Asian or African backgrounds, those with irregular blood pressure or diabetes and even people who are short-sighted.

For many people, eye drops will be prescribed by a glaucoma specialist to regulate the pressure within the eye, which should delay the nerves becoming damaged.

Cataracts are a cloudiness than can form in the lens of the eye, which is often compared to looking through a foggy window. Vision Australia says the most common symptoms of cataracts include blurred vision, sensitivity to light and poor night vision. Glasses can assist for a short time but, eventually, surgery to replace the cloudy lens with an artificial lens is the only way to restore vision.

Aside from ageing, people who have diabetes, have spent a lot of time in the sun without protection and smoke regularly are more likely to develop them. Meanwhile, a family history of cataracts may also make you more susceptible to the eye condition.

Dry eye occurs when the surface of the eyes become sore or irritated because there isn’t enough moisture in the eyes or the tears being produced are of low quality. Both issues result in the eyes drying out and becoming sore.

Avoiding air that is directed in the area of the face can stop dry eye, which means avoiding air conditioning, heating or fans on the face. Wearing sunglasses in windy environments can also reduce the loss of tears to evaporation, while drinking plenty of water and staying hydrated can also ease symptoms.

Diabetic eye disease – also known as diabetic retinopathy – occurs when high blood sugar levels damage the small blood vessels in the retina, causing them to leak fluid. In the early stages, it can be asymptomatic but as it progresses, symptoms can include blurry vision, sensitivity to light and poor night vision.

The nature of conditions like diabetic retinopathy is that there are no obvious early warning signs, as changes in vision happen so gradually that most people don’t realise something is wrong until the problem is very serious. To prevent vision loss, it is essential to have regular eye checks with an optometrist or ophthalmologist so they can detect those subtle, early symptoms.

Is your vision as good as ever or have you noticed signs it’s less sharp than before? When was the last time you had your eyes checked?