The major moments when families gathered in infront of the television 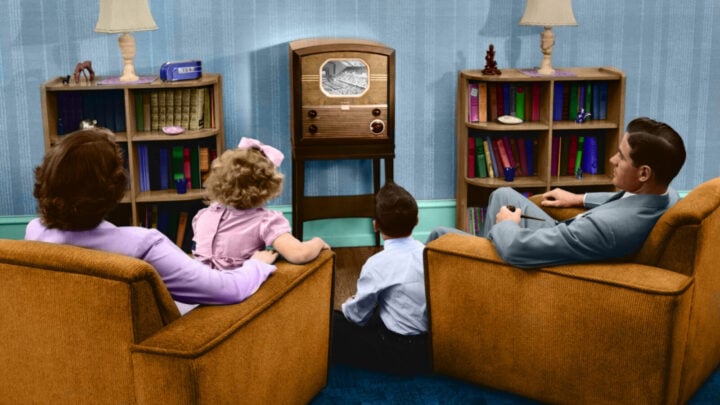 With introduction of streaming the tradition of gathering infront of the television has become a thing of the past. Source: Getty Images.

There was a time when families would gather together in front of the television to watch the latest hit programme, variety show, or major news event. However, with the advent of streaming services such as Netflix and binge-watching becoming commonplace this traditional pastime has quickly become a relic of the past.

With content now so easily accessible anytime and anywhere gone are the days when the family would gather together in eager anticipation for a conclusion to a tv series’ cliffhanger or breaking news, opting instead for a more individual viewing experience.

Although the tradition of family television viewing may be part of a bygone era, we can still fondly remember the events that brought us together as a family in front of the television, whether it be a royal wedding, an international disaster, or humankind’s first foray into space travel.

With so many memorable moments being beamed into our homes since television’s introduction, Stars at 60 dug through the archives to find some of the biggest moments in television broadcasting that brought the family together in front of the small screen.

In a discussion about the major moments that families were glued to their television sets, one would be remiss to not go back to the 1950s where it all started.

“Good evening, and welcome to television”, with those iconic words Bruce Gyngell introduced Australians to commercial television on September 16, 1956.

Those six simple words launched the medium of television in Australia and the subsequent fascination with the moving image and the stories it could tell have kept families fixated on the box to this day.

An estimated 600 million people watched history unfold on July 21, 1969 (AEST) when Neil Armstong took “one giant leap for mankind” and stepped foot on the moon for the first time.

Interestingly Australia played a role in making the monumental broadcast possible with the Parkes radio telescope (commonly known as ‘The Dish’) one of the many radio antennae that received live television images of the Apollo 11 Moon landing.

The broadcast broke the record for the largest viewing audience in history at the time and to this day remains one of the most watched broadcasts of all time.

Taking place on July 29, 1981, the wedding of Prince Charles and Princess Diana attracted a global television audience of 750 million people across more than 70 countries.

The event was labeled “the wedding of the century” and was considered a “fairytale wedding” with royal fans being treated to images of Diana stepping out of a glass coach at St Paul’s Cathedral to reveal her ivory silk gown which featured thousands of pearls and had a 25-foot train.

Prince Charles was adorned in full naval uniform to meet Diana at the alter in from of the 3500 guests in attendance.

To this day the wedding broadcast remains one of the most widely viewed programmes, quickly breaking the record number of viewers that was previously held by the footage of the moon landing.

Everyone remembers where they were on that fateful day that John F. Kennedy was shot with most probably fixated on their television sets in horror as images of the horrible events were broadcast across the world.

On November 22, 1963, Kennedy was assassinated while travelling in a motorcade in Dallas, Texas. In front of thousands of onlookers who had gathered to get a glimpse of the President,  Kennedy was struck with bullets in his neck and head before slumping over onto his wife.

In dramatic scenes, the car sped away to Parkland Memorial Hospital but despite the best efforts of medical staff Kennedy was declared dead.

The day was later described by CBS news anchor as the “weekend that America lost its innocence”.

A more sombre television event was the funeral of Princess Diana where an estimated 2.5 billion people worldwide tuned in to mourn the death of the People’s Princess.

Thousands lined the streets to pay their respect to Diana on September 6, 1997. Eight members of the Welsh Guards accompanied Diana’s coffin through the streets of London.

The coffin was draped in the royal standard and had three wreaths of white flowers atop it, one from her brother, the Earl Spencer, and the other two from her sons, Prince William and Prince Harry.

Prince Harry also placed a letter on her coffin addressed to “Mummy”. At St James’s Palace, the Duke of Edinburgh, the Prince of Wales, her sons, and her brother joined to walk behind Diana’s coffin. Nobody would soon forget the images of a young Prince William and Prince Harry bravely joining the procession in what would have surely been an incredibly difficult time for the young royals.

Many people in both Australia and the United Kingdom will no doubt remember the wedding of Scott and Charlene on the hit series Neighbours. Almost two million Aussies and almost 20 million viewers in Britain tuned in to watch the highly anticipated event, which at the time was billed as the television event of the year.

Although Scott’s iconic hairstyle and Charlene’s dramatic and frill dress may not be commonplace for a wedding nowadays, audiences around Australia and Britain still remember their favorite couple walking down the aisle fondly.

The wedding it still considered one of the greatest television weddings of all time and is regularly voted among the most memorable soap moments.

Some major events draw people to the screen out of interest while others make it almost impossible to look away, one such example is the awkward interview between Molly Meldrum and Prince Charles on Countdown in 1977.

Despite being a seasoned television presenter, Molly Meldrum couldn’t keep his cool when he interviewed Prince Charles on the wildly popular programme.

Having interviewed a number of celebrities during his time on Countdown, you would think his interview with Charles would be another run-of-the-mill experience for Meldrum. However, Meldrum quickly lost his composure as he sat down with the royal.

In hard-to-watch scenes, sweat poured down Meldrum’s face as he became frustrated at his own nervousness. Despite Charles graciously stepping in to comfort the distressed host things went from bad to worse when Charles had to step away so Meldrum could compose himself.

The entire interview took several takes to film and ended with Charles doing most of the talking. Upon conclusion of the interview, Meldrum breathed a noticeable sigh of relief.

No one will soon forget the harrowing images of planes striking the World Trade Centre towers on September 11, 2001.

The attacks caused the deaths 2,750 people in New York. Another 184 at the Pentagon when a plane slammed into the building, and 40 in Pennsylvania when a plane crahsed in a field when passengers attempted to retake control of the plane.

Coverage of the horrifying attacks and the devastating aftermath continued for days after as the public remained glued to their televisions in awe that such a harrowing attack could occur.