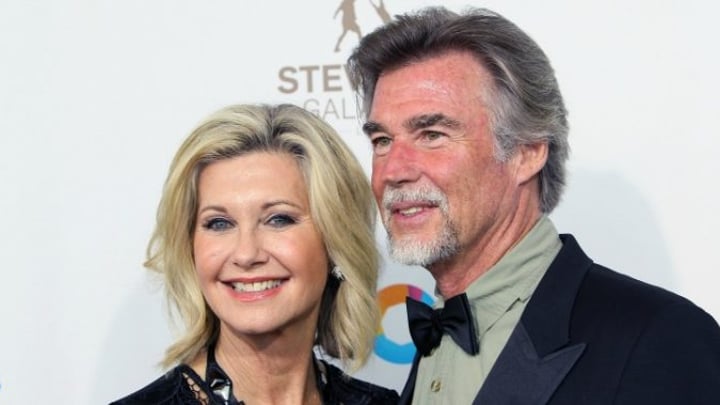 Olivia Newton-John has had the loving support of her husband John Easterling throughout her recent battles with cancer, offering her constant care and keeping her positive throughout her ordeal.

Now, she has publicly spoken about the emotional and mental strain family members and carers face when looking after a loved one, saying they too need help coping with the devastating effects of the disease.

Speaking in an exclusive chat with Starts at 60, the Grease legend, 69, praised John for being her biggest support throughout her current and previous cancer journeys.

The mum-of-one discovered she had a tumour in the base of her spine last year. She had previously overcome breast cancer in 1992 after undergoing surgery and chemo, before secretly beating the disease again in 2013.

Praising both John and her daughter Chloe, Olivia said: “Of course they’ve been a huge support, I think it’s hard for people on the outside – the care takers – because they have to be taken care of too sometimes, because it is hard for them.”

She added: “My husband is wonderful, totally supportive, totally positive, he takes it in his stride.”

John grows cannabis plants for Olivia, as she has chosen natural therapies such as cannabis oil to help ease her pain from the disease, instead of opioids and other drugs such as chemo this time round. He grows the plants in California where the couple live, as it is legal there.

Rather than continuously speaking about her cancer journey with her friends and family, Olivia actually avoids the subject as much as possible to enjoy life and not dwell on any fears about her future.

“I don’t talk about it an awful lot, with my husband maybe, but I tend to just push on with life. It comes up of course, but it’s not something I tend to think about. Denial is a good thing!” she said.

Olivia chose to keep her second diagnosis secret from the public six years ago, only opening up about it recently on Channel 7’s Sunday Night.

She discovered a lump in her shoulder shortly after being involved in a car accident in 2013, around the time her sister Rona sadly died from an aggressive form of brain cancer. She initially assumed her pain was a result of the seatbelt slamming in to her during the crash. Sadly, it was in fact the breast cancer she had beaten two decades before returning.

“I’d written a book and it was an opportunity to talk about it. The journey I’m on now, I’ve been on for a year or two, I just chose not to talk about the one in between,” she said of her admission on Sunday Night. “I chose not to tell anyone, it’s not everyone’s business everything that I do.”

Olivia is now preparing to host her sixth Wellness Walk and Research Run in Melbourne on Sunday, September 16, raising money for her ONJ Centre, which works to help cancer sufferers while developing and trialling breakthrough cancer therapies, as well as the Austin Hospital.

Read more: The real reason Olivia Newton-John cancelled her shows has been revealed

The walk has now become a global event, with people across the world able to take part and connect with those in Australia virtually. There’s a 5km walk and a 5km or 10km run open to all ages.

“Everyone across the world has a personal story where they have been touched by a friend or family member living with cancer, so it makes sense that we all come together, wherever we may be, to raise funds to help people win over and live better with cancer,” Olivia said.

This year’s walk will take place on Sunday, September 16 at La Trobe University’s Bundoora campus in Melbourne. You can sign up on the official site here.

Have you cared for a loved one with cancer? Do you think there needs to be more support for carers of sick loved ones?