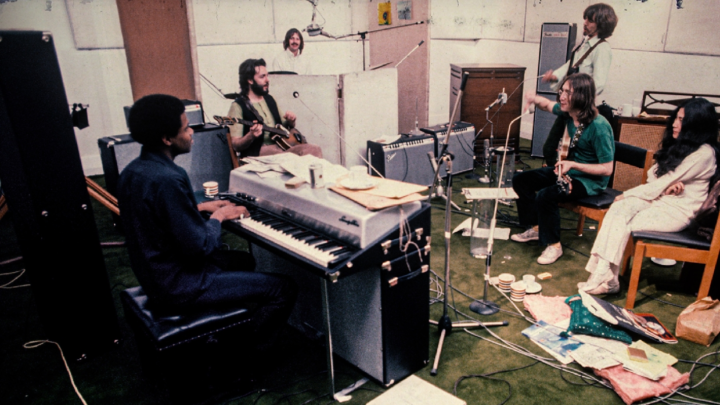 A new doco is set to air never-before-seen footage of The Beatles, including their last live performance. Source: Twitter/@thebeatles

Beatles fans have long been led to believe that the band’s final recording sessions we filled with tension and resentment, but a new documentary by Peter Jackson is turning that idea on its head.

The old narrative around The Beatles’ recording sessions for their Let it Be album was largely due to a popular documentary of the same name, which showed a strained relationship between band members prior to their breakup. Now, Jackson’s documentary The Beatles: Get Back is presenting a counter-narrative, showing the affection and camaraderie of The Beatles in their final days.

The incredible documentary is cut from footage filmed for the original 1970s Let It Be documentary and is set to premiere on November 25, 2021. In a statement, Jackson explains the documentary has been delayed by the pandemic but is now on track for its release. He promises fans a “raw, honest, and human” documentary with more “intimacy that you never thought possible.”

Jackson has spent three years meticulously restoring and editing the 56 hours of footage shot in January 1969 by Michael Lindsay-Hogg that has never been seen before, as well as over 150 hours of unheard audio of the band. The footage captures John Lennon, Paul McCartney, George Harrison, and Ringo Starr while they were writing and rehearsing the ‘Let it Be’ album and preparing for their first performance in over two years.

The original 1970 documentary showed the period as arduous, and tense but the new footage shows the band laughing, joking and recording in relative harmony, a stark difference from how many fans had looked on that final recording period. While surviving band members Paul McCartney and Ringo Starr are said to be reluctant to revisit the ‘Let it Be’ film, the new project has the full support of McCartney and Starr, Lennon’s widow Yoko Ono and Harrison’s widow Olivia Harrison.

Jackson, the man behind the film, is best known for the ‘Lord of the Rings’ films, or more recently his documentary ‘They Shall Not Grow Old’ which was built around restored 100-year-old footage. His restoration of The Beatles footage is just as impressive, turning the 50-year-old film into a remarkably vivid documentary that offers fans a new intimate look at the band.

“In many respects, Michael Lindsay-Hogg’s remarkable footage captured multiple storylines,” he says. “The story of friends and of individuals. It is the story of human frailties and of a divine partnership. It is a detailed account of the creative process, with the crafting of iconic songs under pressure, set amid the social climate of early 1969. But it’s not nostalgia – it’s raw, honest, and human. Over six hours, you’ll get to know The Beatles with an intimacy that you never thought possible.

‘The Beatles: Get Back’ is composed of three separate, two-hour-long episodes which will be aired across three days November 25, 26 and 27, 2021, exclusively on Disney Plus. Originally scheduled for a September release, Bob Iger, The Walt Disney Company executive chairman and chairman of the board said they were “thrilled” to finally be announcing a release date.

Fans can expect to see amazing, never before seen footage of the band up close and personal, including footage of the famous rooftop concert on Savile Row in London that ended up being The Beatles’ final public performance. The film also includes songs that later were released on Abbey Road and Let It Be, two of the band’s final albums.

Will you be watching the 'Get back' documentary?