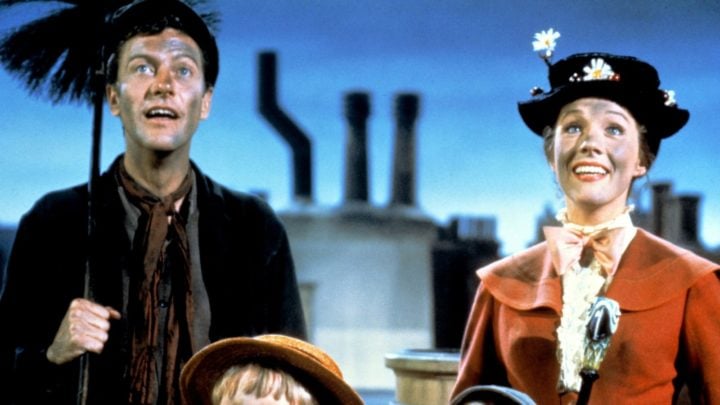 A US academic has divided audiences by claiming the iconic Mary Poppins film is racist. Source: Getty

For generations, Mary Poppins has been a film loved by families all around the world for its wit, toe-tapping musical numbers and star power from icons including Julie Andrews and Dick Van Dyke.

While the charming sequel is currently getting rave reviews as it airs in cinemas, 54 years after the original release, an American academic has now sparked major debate by accusing the lead character in the 1964 classic of “blacking up” in one scene.

Writing exclusively for The New York Times, Daniel Pollack-Pelzner – a gender studies professor at Linfield College in the US – claimed the iconic chimney sweep scene where Andrews and Van Dyke sing ‘Step in Time’ could be seen as ‘racist’ because their faces are covered in black soot. Rather than wiping the soot off her face, Mary Poppins rubs it in, making her face dirtier. Pollack-Pelzner pointed out that the scene may seem comical – if it weren’t for P. L. Travers’ novels on which the film was based.

He pointed out that in the 1943 book Mary Poppins Opens the Door, a housemaid calls a man a “black heathen” when he reaches out his hand and later calls him a “Hottentot” – an archaic slur for black South Africans.

For Pollack-Pelzner, the film is problematic because character Admiral Boom calls chimney sweeps in the film Hottentots.

“We’re in on the joke, such as it is: These aren’t really black Africans; they’re grinning white dancers in blackface,” he wrote. “It’s a parody of black menace; it’s even posted on a white nationalist website as evidence of the film’s racial hierarchy.”

Pollack-Pelzner pointed out Hottentot was also used in 1952’s Mary Poppins in the Park novel, with Mary herself reportedly telling a young child that he’s behaving like a Hottentot.

“The 1964 film replays this racial panic in a farcical key,” Pollack-Pelzner wrote. “When the dark figures of the chimney sweeps step in time on a roof, a naval buffoon, Admiral Boom, shouts, ‘We’re being attacked by Hottentots!’ and orders his cannon to be fired at the ‘cheeky devils’.”

The post has been met with backlash, with many people hitting back at the controversial views.

One person on Twitter wrote: “Dear Internet, Mary Poppins had zero ‘black face’ in the movie. It’s soot because you know that scene with the chimney sweepers and the Chim Chimney musical bit about cleaning chimneys. Focus on the real issue.”

Another comment read: “Mary Poppins wasn’t flirting with black face! It was soot in their faces from being a chimney!!! Stopped spreading racism claims on non racist things like this!!!”

A third added: “Mary Poppins? Really? What next? This just in, people applying mascara and eyeliner (if the color black) are now racist and are doing black face.”

Others agreed with Pollack-Pelzner, with one person writing: “Brilliant article detailing the racist history of #Disney and #MaryPoppins: ‘Nothing’s gone forever, only out of place.’ In other words, the foundation our lives, and our childhoods, is built upon needs to be rebuilt.”

Pollack-Pelzner later faced the backlash with a series of tweets.

“Here’s one thing I’ve learned about the alt-right, after I wrote this article and received a zillion hate messages in response: they sure like Mary Poppins!” he joked. “The chief reason I wrote this article was the hope that a Disney exec would read it, take another look at the forthcoming Dumbo remake, and ask if there was anything just a little bit racist they might want to rethink before it hits the big screen.”

The chief reason I wrote this article was the hope that a Disney exec would read it, take another look at the forthcoming Dumbo remake, and ask if there was anything just a little bit racist they might want to rethink before it hits the big screen. https://t.co/FJzEzhdTt8

What are your thoughts on this? Do you think Mary Poppins is ‘racist’?