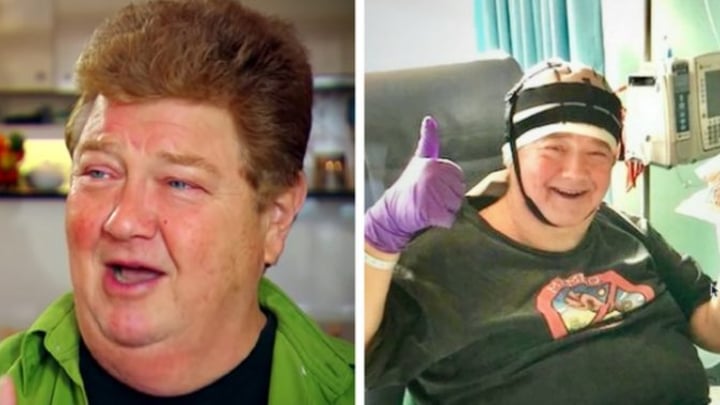 Jono Coleman has revealed he chose to endure agonising pain while wearing an ice cap during chemotherapy to avoid losing his hair, over fears it could alert fans to his secret cancer battle and affect his work on Studio 10.

The 62-year-old Aussie TV legend recently revealed he has been battling aggressive prostate cancer since last June, but chose to keep it secret so he could continue working – something he credits with keeping him busy and helping him cope with his devastating illness.

He only found out his diagnosis following a routine check-up with his GP, who discovered it had spread to his lymph nodes, spine and bones. Within days he was booked in for rounds of radiotherapy, chemotherapy and hormone injections.

Now, speaking in an exclusive chat with Starts at 60, Jono – who is now in remission – has revealed he chose to wear an ice cap during his chemotherapy treatment to ensure he kept his hair and didn’t alert his fans to what he was going through. However, he admitted the impressive measure came with a great deal of pain.

“The chemo stops it from going anywhere or spreading, while the radiotherapy kills it. A year down the track it’s gone, the chemotherapy blew it out of the bones and the lymph nodes,” he explained.

“I was very lucky with the chemo, I wore an ice cap. It’s an English invention out of the NHS I think. It’s hard on your scalp, but it protects your hair.

“You put it on, like a giant shower cap while you’re having chemo. It pumps ice cold water through your scalp – you have to take a couple of pain killers and it last for around eight to nine minutes before the pain just goes away.

“It’s like when you eat something ice cold, like brain freeze, and a lot of people can’t deal with it. But I just thought, I’ve got to keep doing the TV show, I don’t want to lose my hair. It saved it. I was the first guy to do it at St Vincent’s [hospital – where he was treated] I was a test case. I’d recommend anyone try it, at least investigate it.”

Following the chemo, Jono explained he had radiotherapy every day for seven weeks. Despite the constant appointments, he only told the producers and his co-stars at Studio 10, while keeping viewers in the dark with his usual cheery persona and wide smile on camera.

Keen to keep working every morning, he’d head to the studios before going to the hospital just 10 minutes away for his treatment.

“It was bombarding my prostate with radiation, they couldn’t do it faster and even warned me ‘if we did that in two weeks, it would kill you’,” he admitted.

In comparison, the chemo was once a month so he’d head for his appointment on a Friday and take the weekend to recover before work on Monday.

“I find being busy gets me through it. I don’t want to sit at home feeling sorry for myself, everyone copes differently but my way is to keep busy,” he said.

“Even when my father died, they said to me ‘you won’t want to do the TV show this week’, and I said ‘I’d rather do it, that’s what my dad would have wanted me to do, it’s what my mum wanted me to do’, and I think that’s my coping mechanism.”

Jono previously admitted he didn’t even tell his wife of 28 years, Margot, when he was first diagnosed amid fears of how she’d take it. However, when he eventually shared his news a few days later, she was a pillar of strength – as were his two children Oscar and Emily.

While Jono admitted he had his darker moments during his battle, he managed to keep his winning humour throughout, and always reminded himself of one thought – there are people worse off.

“We’re all aware of our longevity and we all know we’re going to shuffle off to Buffalo one of these days,” he joked. However he insisted many people are battling worse – both old and young.

“I know a lot of kids who have childhood cancers, even Johnny Ruffo who is fighting brain cancer. I’ve been friends with him for a couple of years, and all of a sudden he had this terrible headache, went to hospital and they found his huge tumour.

“He’s having radiotherapy as well, and he’s 29 or something. It happens at all ages, so there’s always somebody worse off than you. I’d think ‘s**t, I’ve got nothing to worry about’.”

Do you have a message for Jono? Have you or a loved one battled cancer?