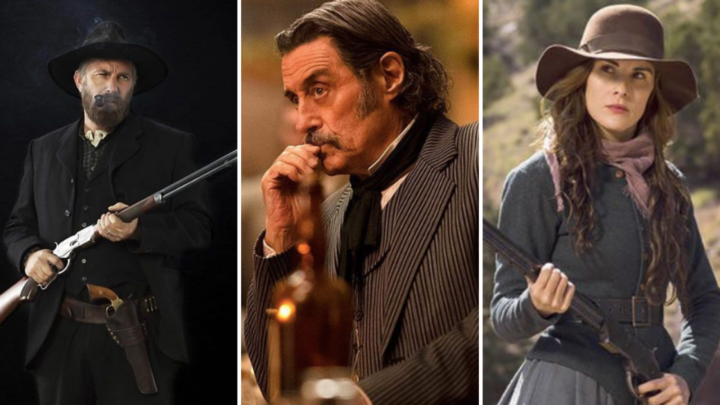 These are the shows to watch if you're on the hunt for a new drama series to get obsessed with. Source: Instagram @spicypulp | @ anitam.bischoff | @netflix_godless

While fans anxiously wait for the series fifth instalment of the megahit ranch drama Yellowstone, we’ve scoured different streaming sites to help fill the hole in our hearts and viewing schedules until we learn more about the fate of the Dutton family.

These are six of the best shows to watch right now if you love Yellowstone- otherwise Yellowstone seasons one to four are available for watching, or rewatching, on Stan.

This series is best for the lovers of gritty Western dramas. Deadwood centres around the historical time of the American gold rush and focuses on the titular town where misfits and outlaws settle there to make their fortune. The storyline follows the ruthless power dynamics that occur as a result of the town’s rampant lawlessness. The town itself attracts a colourful variety of characters from diverse backgrounds all looking to find their fortune.

Deadwood has received critical acclaim for its storyline and its performances and is even regarded as one of the greater television shows of all time. The series has also won eight Emmys and one Gold Globe.

While the series only has three seasons, there is also a movie, Deadwood: The Movie available to watch.

If you’re looking for more cowboy Kevin Coster in your life, then Hatfields & McCoys is right up your alley. The Hatfield-McCoy story examines ‘Devil’ Anse Hatfield (Kevin Coster) and Randall McCoy (Bill Paxton) who are close friends and comrades until the Civil War draws to a close bringing them home to confront increasing tensions and misunderstandings that soon explode into a full-blown conflict between the families, bringing the possibility of another war ever closer.

This mini-series is based on a true story of a bitter blood feud between two families and is filled with themes of passion, vengeance, courage, and sacrifice which drastically altered the families and the history of the region forever.

Hatfields & McCoys is available for streaming on Foxtel Now and iTunes.

This series is best for fans of intense family dramas. Succession centres around the Roy family, the “dysfunctional” owners of Waystar Royco, a global media and entertainment conglomerate. Amid the family’s patriarch, Logan Roy’s (Brian Cox) health issues, his four children struggle to keep control of the company as their personalities start to clash and the idea of power control causes a rift between them.

Collider describes the show “as a satirical drama that waffles between genres to subtly reference the perils of generational wealth and a voracious appetite for power”.

Succession is available for streaming on Binge and Foxtel Now.

Ever wondered what a town full of Margeret Duttons would be like? Then Godless is the series you need to watch. Set in 1884, this series tells the stories of a male outlaw taking refugee in a town populated almost entirely by women. This seven-part modern Wester series is the ideal quick watch for anyone who loves Yellowstone for its wild chases and all the intense drama that comes along with it.

Godless is available for streaming on Netflix.

If the Western aspect of Yellowstone is what got you hooked on the show the most, then you might enjoy this modern-day country opera. Nashville revolves around the lives of various fictitious country music singers  Rayna Jaymes (Connie Britton) a 40-year-old legendary country music superstar, whose stardom begins fading. Rayna’s record label thinks a concert tour, opening for up-and-comer Juliette Barnes (Hayden Panettiere) will help save the singers dying music career, but sharing a stage with that disrespectful, younger singer is the last thing Rayna wants to do, which sets up a power struggle for popularity.

Set against the backdrop of Nashville’s thriving contemporary music scene, and political world, Nashville takes you inside the cutthroat world of country music, family, and politics.

All six seasons of Nashville are available for streaming on Stan.

The Sopranos is an oldie but a goodie. There isn’t a stronger family patriarch presence than Tony Soprano. The Sopranos tells the story of fictional New Jersey-based Italian Amerian mobster Tony Soprano and the difficulties he faces as he tries to balance his daily life, his criminal organisation, and dealing with the failures of never having the makings to become a Varsity athlete.

This series is the blueprint for modern television drama, if you don’t mind swapping beautiful countryside Montana for New Jersey then this show will easily be your next binge.

You can stream all seasons of The Sopranos on Bince and Foxtel Now, as well as download all episodes via iTunes and Google Play.

What show are you currently watching? Do you have any TV or movie recommendations?