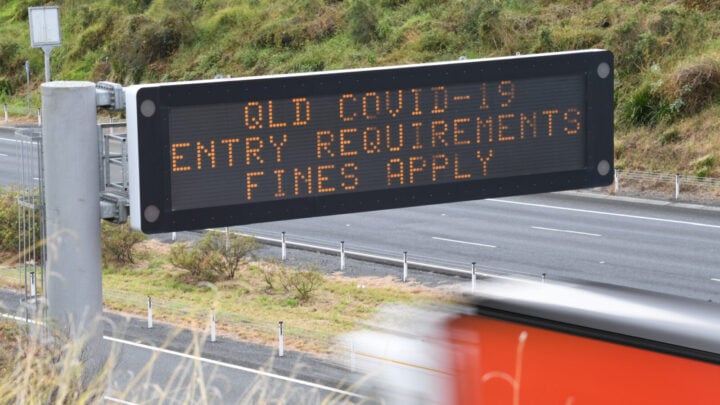 In the past 18 months, states and territories have continued to impose border restrictions to curb the spread of coronavirus. Source: Getty

A columnist has slammed the nation’s tough state border restrictions and closures, claiming that at the height of the Cold War it was easier for an Australian to visit East Berlin than it is to move freely around the country now.

Writing for The Daily Telegraph, Tim Blair, who lives in New South Wales, began by detailing his own failed attempts at crossing the state border into Victoria to see his elderly mother.

“If at first you don’t succeed, then obviously you live in NSW and have tried at some point in the last year to visit another Australian state,” he wrote. “And so you try, try and try again. It took four attempts before I made it across the border to finally see my dear old mother last month in ­regional Victoria.”

Blair went on to highlight the country’s prolonged, strict restrictions, saying, “Even hundreds of kilometres from Melbourne, in towns that have not recorded a Covid case for months, you’ll still get yelled at in certain shops if you forget your mask.”

The columnist then made the controversial comparison between Australia’s tough border restrictions and the Cold War. “Let’s place our current border restrictions in a historical context,” he wrote. “A few weeks after I was born in Melbourne, way back in 1965, a young John Howard found himself strolling around West Berlin. At the height of the Cold War, it was easier for an Australian to visit East Berlin than it is currently for an Australian to enter and travel across his state of birth.”

Blair also slammed the nation’s top health experts for continually contradicting themselves. He used Queensland’s chief health officer as a prime example. “In March, for example, Queensland’s chief health officer Dr Jeannette Young was all for AstraZeneca, [saying] ‘The AstraZeneca vaccine is a game changer for us here in Queensland. I don’t want anyone to have any reservations about getting a certain vaccine or preferring one over the other.’ But last week she turned against the vaccine, at least for some folk. ‘I do not want under-40s to get AstraZeneca,’ Dr Young said. ‘We are not in a position that I need to ask young, fit, healthy people to put their health on the line.’

“She’s the expert. The weird thing is, even after we’re all properly and safely vaccinated, we’ll still likely be constrained for some considerable time by various Covid restrictions.”

Last Friday, Prime Minster Scott Morrison unveiled a four-phase plan out of Covid-19. The PM announced that the cabinet had agreed on the plan, which includes: lockdowns to be a last resort, home quarantine for returning vaccinated travellers, shorter quarantine periods – likely seven days as opposed to 14 – for the vaccinated, and international arrivals cut by 50 per cent.

What are your thoughts on this? Do you agree with the columnist?