Jojoba: The little skincare miracle you need in your life 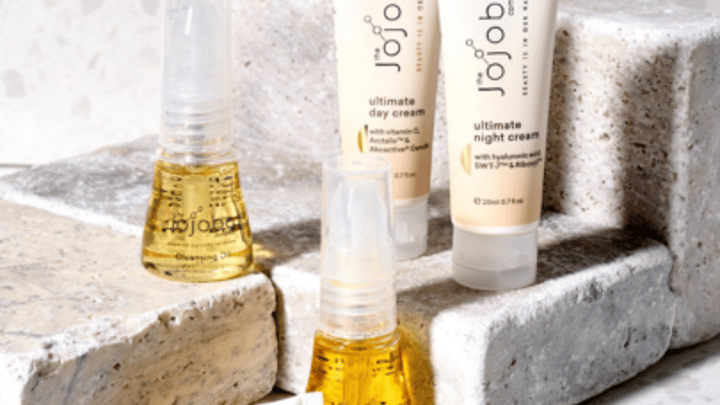 The Jojoba Company is the world’s first-and-only company to create skincare from the Wadi Wadi strain of the jojoba plant. Starting in 2000 from a humble family farm in the nutrient-rich soil of Yenda, in the Riverina region of southwestern New South Wales, Vicki and her father decided to launch into skincare with their abundance of jojoba, after recognising the potential of the plant. In 2008, when the first crops came to fruit, The Jojoba Company began formulating their hero product.

Through a simple process, jojoba beans picked from the family farm are sent to be cold-pressed at a local factory through a delicate, extra-virgin pressing and filtering operation, ensuring that all nutrients are maintained within the oil itself. From here, the golden liquid of the jojoba bean is used as the basis for The Jojoba Company’s entire skincare range.

Vicki explained that the reason why jojoba is so special is because it’s the only plant to store a liquid wax within a seed. Additionally, the liquid “shares the same molecular structure as the natural oils found in healthy human skin, making it more receptive to receive vital nutrients and antioxidants, restoring balance and helping your skin behave as it was designed to”.

Jojoba is also crammed full of naturally occurring antioxidants, omegas 6 and 9, as well as vitamins A, D, and E. This makes jojoba an incredibly beneficial ingredient for the skin, and The Jojoba Company has some great products (below) that it guarantees will have you seeing results in just one week.

The ultimate tool, Aussie jojoba is a fix-all for virtually everything – make-up remover, moisturiser for dry skin, balancer for oily skin, and even a treatment for razor burn and dry hair. The product (below) is just pure Australian jojoba oil, pressed, filtered and bottled.

The Ultimate Night Cream does what it says on the jar. Made of pure Australian jojoba, mixed with only the best ingredients, this rejuvenating cream is the best thing for your face. Other ingredients include Swertia (SWT-7), which works to blur wrinkles and improve skin roughness by improving skin regeneration, and a light hyaluronic acid, which hydrates and plumps skin. The proven results guarantee that there is a 78 per cent reduction in fine lines in just four weeks. Additionally, over that same four-week period, you’ll see a marked 53 per cent reduction in deep wrinkles and a 42 per cent reduction in skin roughness – yes please!

Designed to bring skin back to its ideal, youthful profile, the blend of jojoba, macadamia, olive, baobab, CoQ10 and argan oil all work to firm and restore a perfect complexion by increasing elasticity, healthy skin lipids and hydration.

The Jojoba Company’s natural Ultimate Minis are the best of the best. The perfect pack to buy as a gift for the women in your life or for yourself, they are also a great size to pop in your toiletries bag for travel. (They also make a perfect little set to grab as a tester, before you launch into the full-sized products.) The mini-set contains five delightful products: Jojoba Activating Cleansing Oil, Ultimate Serum, Ultimate Youth Potion, Ultimate Day Cream and Ultimate Night Cream. Grab them now!

IMPORTANT INFO We write about products and services we think you might like and may receive payment if you click on the links in this article or go on to make a purchase.

Which of these great products are you keen to try?