Elderly woman, 84, ‘forced to lie on hospital floor’ due to lack of beds 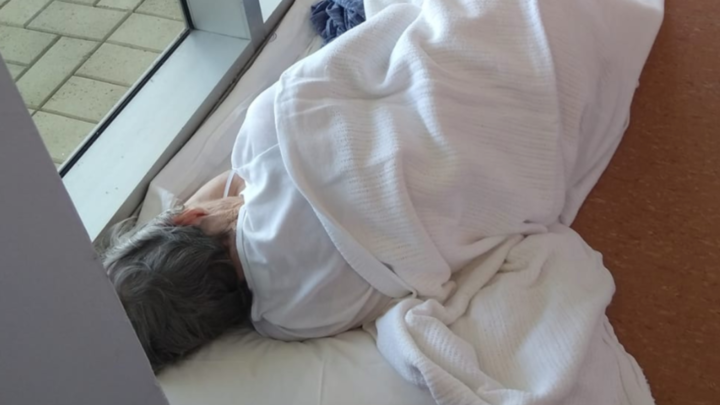 Neil's mother spent two hours on the floor before a bed was found for her. Source: Facebook/Neil MacLachlan.

An elderly woman was forced to lie on the floor of a hospital in Western Australia while she awaited treatment due to a lack of beds.

Neil MacLachlan publicly shared a heartbreaking image of his 84-year-old mother curled up beneath a blanket on the hard floor, with just a single pillow to make her comfortable.

Despite being rushed to Geraldton Regional Hospital in an ambulance due to kidney pains, the unnamed woman was left with no option but to find a spot on the floor, as she could not sit up comfortably in the waiting room chairs due to her condition.

“84 yo woman forced to lay on floor in doorway while waiting for treatment at Geraldton Regional Hospital due to no beds available,” he wrote on Facebook on Wednesday. “Disgraceful!”

He added: “Arrived in Ambulance and tipped out to wait on floor!”

MacLachlan, who lives in Geraldton, WA, later revealed that the ordeal went on for two hours before a bed was made available for his ageing mum, and only thanks to the intervention of an aged care worked who became aware of the situation.

“She was unable to sit upright due to unbearable kidney pain and the hospital did not have any beds available and could not offer anything else,” MacLachlan further wrote on Facebook. “Fortunately the ordeal came to an end after 2 hours when an aged care worker based at the hospital found out what the situation was and promptly saw that a bed was made available.”

MacLachlan went on to say that he did not blame the hospital staff for the incident, describing them as doing “a great job in trying circumstances”, adding that he blames “the system” for not prioritising the care of the elderly and their needs.

“A sorry state where this is how we treat our aged folk,” he added. “I guess this is what the grand advancement of evolution and our modern society has won for us!”

The moving post received hundreds of responses on social media and was shared more than 3,000 times.

One person wrote: “I agree. We do not treat our elderly like this. DISGRACEFUL.” Another said: “We will all have to start taking our own beds in soon. The elderly stopped being priority a very long time ago. It is disgraceful indeed.”

While a third wrote: “That is really strange. A bed magically appeared two hours later? What happened, someone was discharged or died in the interim? I suspect the bed was there all along unless I can be convinced otherwise.”

The post even caught the attention of WA Health Minister Roger Cook who personally responded to the message, offering

“Thanks for bringing this matter to my attention.,” Cook wrote. “I have just spoken with your mother on the phone and apologised unreservedly as Minister for Health.

“The situation your mother found herself in at Geraldton Hospital yesterday is appalling and unacceptable. I have asked for an urgent meeting to ensure this doesn’t happen again.”

What are your thoughts on this story? Have you ever found yourself in a similar situation?