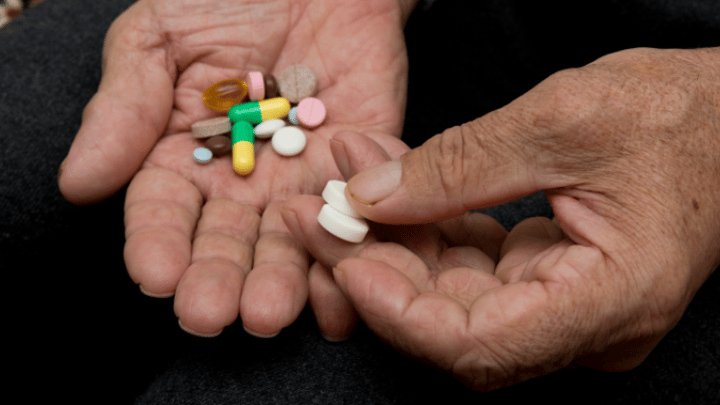 A new study has revealed taking an aspirin a day isn't the healthiest option. Source: Getty

Taking a daily dose of aspirin is common for many elderly people but new ground-breaking research has revealed the drug could actually be doing more harm than good.

Australia’s largest clinical trial conducted by Monash University researchers has proved an aspirin-a-day doesn’t lower the risk of death, disability or cardiovascular disease and instead increases the risk of major bleeding problems.

The study, published in the New England Journal of Medicine, took place over five years and involved more than 19,000 people over the age of 70 who tested the effects of aspirin and placebo. Perhaps surprising to some, no benefit of taking aspirin was found, in fact those taking the medication had slightly higher rates of death.

This is a major breakthrough for researchers, with principal investigator Professor John McNeil claiming the new evidence will result in a major shift in global guidelines relating to the use of aspirin to prevent common conditions associated with ageing.

“Despite the fact that aspirin has been around for more than 100 years, we have not known whether healthy older people should take it as a preventative measure to keep them healthy for longer,” he admitted. “Aspirin is the most widely used of all preventative drugs and an answer to this question is long overdue.

“These findings will help inform prescribing doctors who have long been uncertain about whether to recommend aspirin to healthy patients who do not have a clear medical reason for doing so.”

While aspirin has been a commonly used drug among the elderly, it has been taken with the risk of bleeding, which is known as a side-effect of taking the medication.

Read more: Aspirin could prevent a ‘broken heart’ after losing a loved one: Study

This latest study has indicated just how bad the side-effects can be with a clear increase in the number of cases of serious bleeding among aspirin takers at 3.8 per cent compared to the placebo group at 2.8 per cent.

“It means millions of healthy older people around the world who are taking low dose aspirin without a medical reason, may be doing so unnecessarily, because the study showed no overall benefit to offset the risk of bleeding,” McNeil added.

Although the study showed obvious risks of taking aspirin, McNeil remained convinced that the drug is a relatively safe medication to use. However, more research was needed to investigate its use more thoroughly.

Following the first discovery, researchers will continue to follow the health of participants and monitor to effects of aspirin over long-term use.

What do you think of the latest findings? Do you take aspirin regularly?