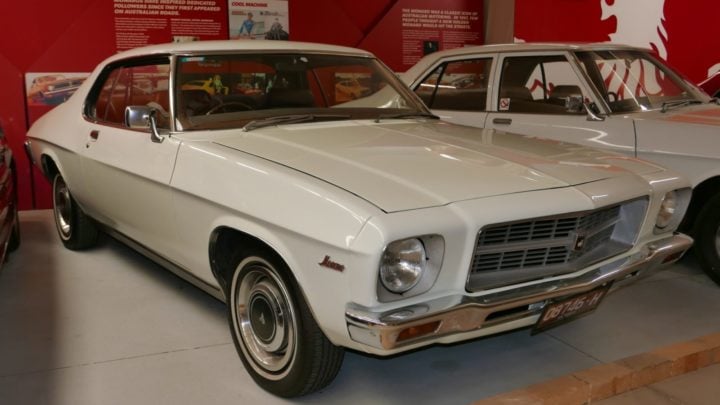 Even 48 years on, the HQ Holden is considered by many to be the most beautiful car ever designed for mass production in Australia. Nothing else ever really came close. At its release in July 1971, the common reaction from people seeing it for the first time was a dropped jaw accompanied by a catch of breath.

Penned in GM-H design studios by an American, Leo Pruneau, it was a unique shape, albeit bearing several GM design influences including the ‘W’ nose. It retained (and was the last car to have) all the features made popular in the 48-series just after World War II: four doors, bench seats able to carry six of us at a time, a lazy six-cylinder engine driving the rear wheels through a three-on-the-tree manual, and simple mechanicals that could be repaired by just about anyone, just about anywhere, even on the side of the road.

Perhaps the first thing people noticed was the lack of a triangular ‘flipper’ window. Was this a serious loss? Through every previous iteration of ‘Australia’s Own’, a driving position known to the world as ‘The Holden Hunch’ had developed to prevent drivers sliding across smooth, slippery vinyl seats when cornering. It meant squeezing the backside into the angle between seat and door and holding on to the flipper window channel. I’ll return to this shortly.

Four years earlier, an American engineer named George Roberts arrived Down Under. It was at the time of the HK release and he was not best pleased to find a car that had such firm suspension. He believed every car in the GM world should wallow like a Cadillac. Rather than allow a car suited to a decent set of radials go to market, Roberts mandated the use of low pressure four-ply cross-bias tyres for comfort on the HK, with sometimes unpleasant results. That same mentality remained in vogue at the time of the HQ design and release.

While all Holdens from the 48-series through to HG were full mono-construction, the HQ was different. It had a front subframe that bore engine, transmission and suspension, and which attached to the body through insulated mountings. This, combined with vague steering and a spongy suspension, isolated occupants from the road and provided a soft, quiet, cosseting ride, albeit combined with sloppy handling.

A friend, invited by a salesman to take a Kingswood for a fang in the hills behind Burnie, returned shaking his head. “Understeer! I don’t reckon those front tyres’d be any good for more than two trips to Hobart.” (Remember, this was Tasmania, where the greatest distance ever measured between corners is 127.3 metres.) “I reckon you’re gonna have trouble getting the gravel rash off them door handles, too, mate. And jeez, there’s not even a flipper window channel for a bloke to hold on to!”

The handling might have been a bit ‘iffy’, but this big car provided perhaps the best ride ever over long distances on Australia’s frequently indifferent road surfaces. Upper specification and sports model with their huge front bucket seats (especially if you used sheepskin seat covers) offered reasonable comfort, too. One of the anomalies, especially for the time, was that the sporty V8 Monaro models were a better drive as a three-speed auto than when struggling with a heavy clutch and imprecise change pattern on the four-speed manual.

There were options available, including 4.2-litre and 5.0-litre V8s, but the most common purchase was either 3.3-litre six or 4.2-litre V8 with Trimatic auto trans. Interestingly, except for the distinctive V8 burble, there was little advantage taking the bigger engine over the smaller.

The HQ was large, it was heavy, the 2.8-litre and 3.3-litre sixes low-tech and getting on in years, and fuel consumption pathetic, but hey, petrol was cheap back then and most of us didn’t give a tinker’s cuss about climate. It was strong and reliable and a design that endeared itself to Australia’s car buying public, selling almost half a million units overall.

Finally, and I guess it can be taken as a form of backhanded compliment, the HQ (which lacked any handling finesse when released) frequently sees out its days running in its very own motor racing category, something giving rise to the expression, “Old HQs never rust away, they just go faster”.