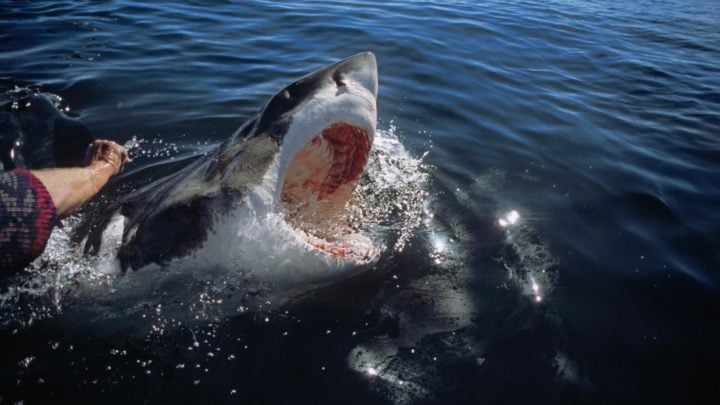 Rod has been obsessed with sharks since he was a child and remembers many of the fatal attacks in Australia's Sydney Harbour waterways. Source: Getty Images

Sharks have always been a small obsession with me. Call me ignorant and point me to the stats that say you’re 1,000; 10,000 times more likely to be greased by a car than torn apart by an antediluvian monster. Call me stupid, but somehow the prospect of being eaten alive, slowly, before your very eyes, seems like a real turn-off.

Yet, I’ve had this obsession for as long as I can remember. I recall sitting in Sunday school, aged seven, while an infinitely patient lady told me, “No, young man, Jonah was not swallowed by a shark; it was a whale”. It was some satisfaction to read in the King James version many moons later that, in fact, a ‘big fish’ had done the dirty deed on old Jonah, which really got me thinking. But I digress.

The big event of 1954 was, of course, the Royal Visit, the first ever by a reigning sovereign to this her most ambivalent of colonies. Yet it was a huge event at the time and there is still plenty of colour footage around of Her Majesty’s landing at Farm Cove, New South Wales the hundreds of thousands cheering on Macquarie (including l’il moi) and Bridge streets, and much else.

However, what has been forgotten was the frisson of terror that had swept through Sydney less than three months before when there were two fatal shark attacks within days in the same vicinity — one at Balmoral and one further up Middle Harbour. Vigilante posses were formed with a barrier of 0.303-armed men in boats lining The Spit to nail the culprit. If it had been possible, I have little doubt a United States-style ‘necktie-party’ would have been in order such was the mood for vengeance.

It was some time later I gamely asked my parents for a copy of Dr V.M. Coppleson’s Shark Attack, his chilling anthology of gruesome deaths. What had been a sick apprehension as I pored over the stats, became living, breathing people. Like Joseph Troy Jnr of Matapoissett (a town in Massachusetts, US); the Shark Arm Mystery of Coogee, NSW, Australia; Albert Kogler of San Francisco; Noel Langford of Wamberal, NSW; to be joined shortly after by Ken Murray of Roseville Bridge. And many more since.

Yet the one case that always manages to stir those uneasy waves inside many of us, was that of well known actress Marcia Hathaway at Sugarloaf Bay in 1963, billed for many years as “the lost shark fatality in Sydney Harbour”. As so many remember where they were when JFK was assassinated, I remember exactly where I was when news broke over the car radio of her mauling one sultry Australia Day weekend. I was on my way back from surfing at Freshwater, driving along Warringah Road, just passing the old Artransa Park television studios in Sydney.

The dread of that afternoon never left me, and, thereafter, I always made sure I was never the one furthest out past the first line of breakers. Moreover, in pursuit of a bitsy story for the Summer Herald about 30 years later, I discovered a small memorial plaque to Marcia Hathaway just inside the entrance to St Stephen’s Church in Macquarie Street, advising those who paused to read that the floodlighting on the facade had been donated from a collection raised by her saddened colleagues in Actors’ Equity. I never wrote the story.

Lest anyone think I’m particularly mawkish about sharks, let me draw attention to a former friend, who attained very high (and responsible) public office in NSW, who once said he was “so terrified of sharks that I would never shower alone”. So there!

Of course, there was Mike P. whom I met on the News Desk at the Sydney Morning Herald in early-1988 and late one evening, when the presses had slowed and philosophy filled the vacuum, the conversation turned inevitably to sharks. It was astounding to be told that he had been at Balmoral, on a family picnic the very day that poor John Willis was killed in February 1954 and rang through the story to his editors at the old Sun. Despite being a mere cadet journo, it was his “first by-line”, he rather bashfully told me.

There was Simon L., also a colleague at the Herald, who briefly became an international celebrity when “this grey thing with big, staring eyes” fastened on to his board inside the shark mesh at Bronte, leaving a nasty human-sized semi-circle of puncture marks on the polystyrene.

You could say, then, that sharks have always been in my blood and also that of a good many of my own generation and those before us. It was with some consternation when I found myself, in 2008, entangled in the whole uproar over shark meshing and drum lines after a series of particularly horrible attacks in Western Australia.

As the editor of a regional newspaper on the NSW South Coast, I always received a steady flow of story suggestions from eager readers, but at this time I was deluged by emails demanding the paper take a stand against the environmental villainy being perpetrated over in the west. Being an even-handed editor, I tried to go with the flow until the tide ran out, but the transparent lack of action on my part had the contrary effect of inciting my readers even more.

Eventually, as a democrat, I dipped my toes in the water and timidly replied to one particularly aggressive advocate of sharks’ rights, that as someone who had once had an unsettling brush with a shark at Mona Vale, perhaps the swimmers and surfers had, at least, a point. Wrong move!

I glumly accepted that it was indeed their domain and subsequently restricted my surfing to the hours of 10am to 3pm, only on clear, sunny days, no murky water and an outgoing tide. Well, I’m still alive, so I can tell the tale, but, let’s face facts, it was a lot of fun while it lasted.

Is there something you have a small obsession about? How do you feel about sharks?