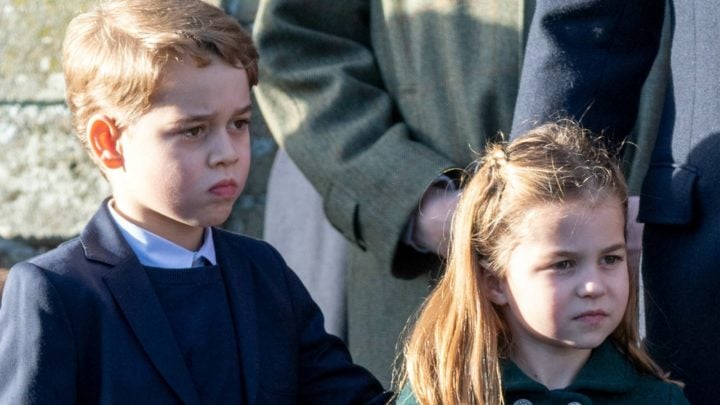 All eyes were on the Cambridge kids as they made their debut at the service. Source: Getty

They might be among the youngest royals but the Duke and Duchess of Cambridge’s children completely stole the show at the royal family’s Christmas Day church service.

Everyone from Prince Charles to Princess Eugenie and Princess Anne took part in the royal family’s annual walk to church, but it’s safe to say all eyes were on the Cambridge kids as they made their debut at the service.

Photos of Prince George, 6, and Princess Charlotte, 4, are flooding news feeds across the globe after the two walked alongside their parents, Prince William and Catherine.

For the occasion, Prince George wore a navy suit, while Princess Charlotte looked festive in a green coat.

At one point four-year-old Charlotte hugged a woman in the crowd, who gifted her with a pink flamingo.

As always, Catherine didn’t disappoint in the style department, stepping out in a double-breasted grey coat with a green fascinator and matching heels. While Prince William wore a long navy coat.

Other members present at the traditional service included the Duchess of Cornwall, Princess Eugenie and her husband Jack Brooksbank, and the Queen’s youngest son, Prince Edward with his wife Sophie Wessex and their children. Sophie wore a fashionable cream coat and red headband.

Princess Beatrice and her fiance Edward Edoardo Mapelli Mozzi, whom she will marry next year, were also in attendance.

Elsewhere, Her Majesty the Queen opted for a festive red coat and hat. The 93-year-old monarch was not joined by the Duke of Edinburgh, who was admitted to hospital last week. He has since returned home.

Prince Andrew, who announced last month that he was stepping down from his royal duties amid backlash from his relationship with the late sex offender Jeffrey Epstein, appeared to attend an earlier Christmas church service.

The Duke and Duchess of Sussex were notably missing from the church service.

“The Duke and Duchess of Sussex are looking forward to extended family time towards the end of this month,” a palace spokesperson said in a statement last month, according to The Telegraph. “Having spent the last two Christmases at Sandringham, [the couple] will spend the holiday this year, as a new family, with the duchess’ mother, Doria.”

“This decision is in line with precedent set previously by other members of the royal family, and has the support of Her Majesty The Queen.”