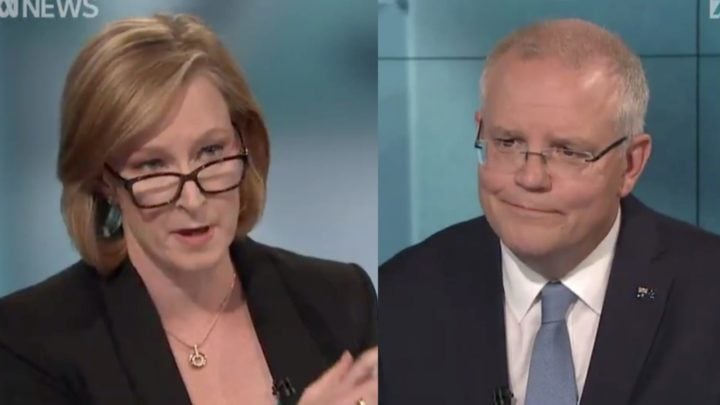 Scott Morrison has sparked debate online after he clashed with Leigh Sales in a very awkward TV interview.

The Aussie prime minister appeared on ABC’s 7.30 program to discuss his election campaign, but it resulted in him interrupting the TV host to get his point across without interruption.

As Morrison launched into a speech about the 2019-20 Budget being back in surplus, Sales tried to question him further to which he replied: “I haven’t finished yet.”

Meanwhile, he was also asked by the TV host whether former prime ministers such as John Howard, Tony Abbott and Malcolm Turnbull – whom he took over from following a leadership spill – would be present at his launch on Sunday.

.@leighsales asks @ScottMorrisonMP: 'Who’ll have the upper hand in driving Liberal Party policy if you’re re-elected, the climate change sceptics who killed the NEG, voted against same-sex marriage & orchestrated Turnbull's downfall, or the mainstream of the party?' #abc730 pic.twitter.com/Kwg2YB78PM

“It’s not a hoopla event. It’s not about the Liberal or the National Party,” he told Sales.

“I just want to a conversation with people on Sunday directly about the choice. It’s not about who’s coming. It’s about who will be listening?”

Of course, Sales didn’t dodge the issue of Turnbull’s ousting, and when asked: “If your record is as good as you say, why did you have to dump a PM?” Morrison hit back: “That’s a matter of record and history now, Leigh.”

He later added: “The previous PM, Mr Turnbull, had lost the confidence of the Liberal Party room and they changed PMs. What I did when I became PM was make sure that can’t happen again.”

Several social media users vented their frustrations over the TV chat online, with one commenting on Twitter: “It was a very frustrating interview to listen to. Morrison talked and talked and talked, so much so that I lost interest. He was ranting, little realising he wasn’t cutting through .. the sooner this mob is gone, the better.”

Another added: “You did a great job tonight on interviewing the PM!….. I found him evasive self centred and arrogant!”

However others focused on the questions themselves, with some praising Morrison for appearing, with one writing: “Great question.”

It comes after two surprising former PMs joined forces as a show of support for Shorten at his election campaign launch on Sunday. Kevin Rudd and Julia Gillard – who both famously stabbed each other in the back for the top job in 2010 and 2013 by causing leadership spills – sat together at the official launch.

What did you think of the TV interview?