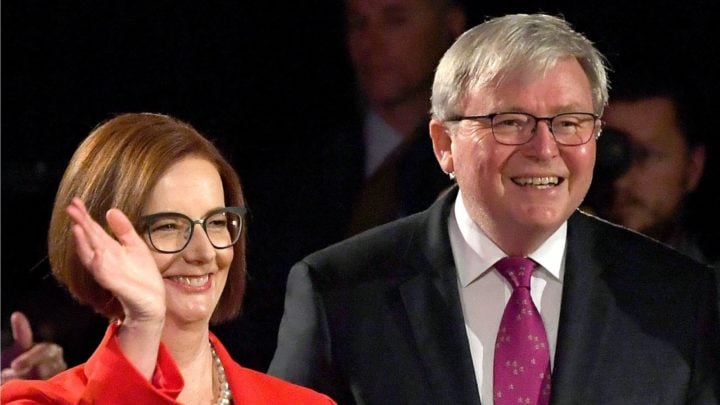 They famously stabbed each other in the back for the top spot in 2010 and 2013 but Rudd and Gillard appear to have put their differences behind them to show their united support for Bill Shorten. Source: Getty

With just weeks to go until Australians hit the polls, Labor leader Bill Shorten is doing everything he can to secure as many votes as possible.

Shorten also praised Bob Hawke, who didn’t attend the launch because of health issues but watched from home.

Shorten also used the launch to make a number of announcements, including a $500 million pledge to reduce waiting times across Australian hospitals.

“Chloe and I know what it’s like to sit inside the emergency department, holding your child in the middle of the night,” Shorten said earlier in a statement on Sunday morning. “Most parents know what that’s like, and every parent fears it. There’s nothing more nerve wracking, exhausting or dispiriting.”

He called Australian nurses and doctors “absolute heroes” and “the best in the world” and said because of that, they deserved the best resources in the world.

“This is what people pay their taxes to Canberra for. I don’t want to give it to multinationals in bigger loopholes, I want to build better hospitals and cut waiting times,” he added. “This is what our hard decisions have been about. Delivering better services to every Australian.”

Who will you vote for at the next election?