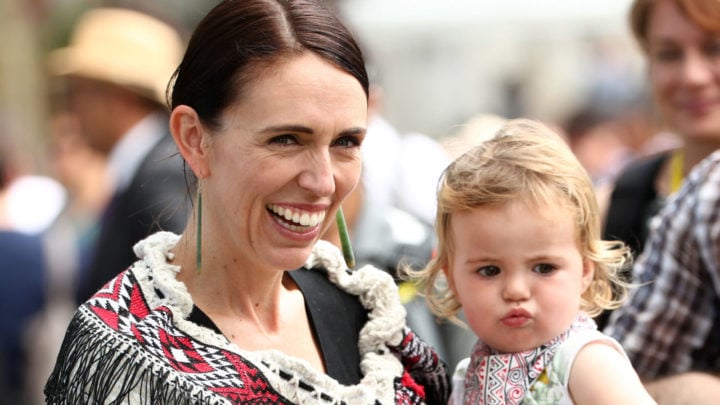 Ardern brought baby daughter Neve, who is now almost 20 months old, to work with her as she attended a series of poignant events to mark the country’s national day. The events take place over a series of five days and little Neve has made several appearances this week alongside her mother and father.

The adorable blonde toddler’s most recent appearance came on Thursday morning as she tucked into a sausage that had been barbecued by her mother as she helped to serve up breakfast to 1,000 members of the public.

Neve, who will turn two in June, was also pictured enjoying a moment of peace with her busy mother, as Ardern held her young daughter close to her.

Waitangi Day is the national day of New Zealand and commemorates the signing of the Treaty of Waitangi, by representatives of the British Crown and Māori chiefs from the North Island of New Zealand, on February 6 1940.

Thursday’s celebrations began with a dawn service at Te Whare Rūnanga before the prime minister helped to prepare breakfast for 1,000 people, alongside Greens leader James Shaw and other NZ MPs.

The ‘First Baby’, as she has been affectionately dubbed, first stole the show on Tuesday as she coordinated with her mother in matching dresses which featured traditional prints, during celebrations at the Waitangi Upper Treaty Grounds. Neve was also seen playing with her father’s camera as he attempted to keep her occupied throughout the official engagements.

Neve was also pictured alongside her parents on Wednesday as Jacinda joined the crew on the Te Whanau Moana waka for a paddle. The tot looked adorable in denim shorts and a pink bucket hat as she sat in her stroller.

Neve was born on June 21 2018 and the prime minister, 39, shared the happy news with the world on social media just hours after delivering her first child, whom she shares with fiance Clarke Gayford.

“Welcome to our village wee one,” she wrote. “Feeling very lucky to have a healthy baby girl that arrived at 4.45pm weighing 3.31kg (7.3lb) Thank you so much for your best wishes and your kindness. We’re all doing really well thanks to the wonderful team at Auckland City Hospital.”

The couple later revealed, upon leaving hospital, that they had chosen to name their daughter Neve Te Aroha Ardern Gayford, or just ‘Neve Gayford’ for short.

Welcome to our village wee one. Feeling very lucky to have a healthy baby girl that arrived at 4.45pm weighing 3.31kg (7.3lb) Thank you so much for your best wishes and your kindness. We're all doing really well thanks to the wonderful team at Auckland City Hospital.

Ardern is one of only a few female leaders to have given birth while holding office – the most recent being former Pakistani PM Benazir Bhutto, who had her daughter in 1990. And, despite not holding political office, Queen Elizabeth II of course welcomed all four of her children during her reign.

Can you believe how much Neve has grown?