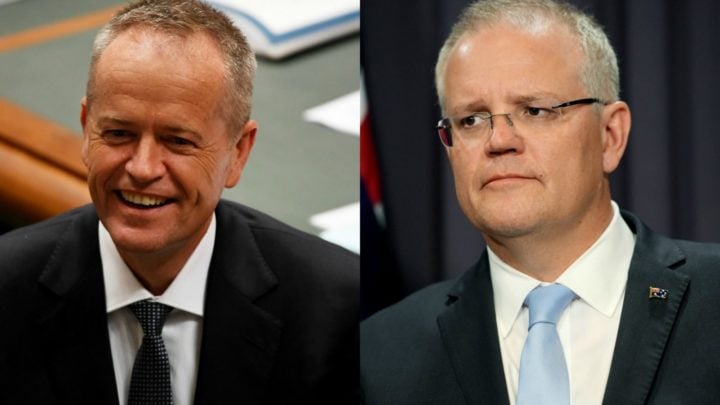 The latest Newspoll shows the gap between Labor and the Coalition is shortening. Source: Getty

The Coalition performed a dramatic U-turn in the post-budget polls, receiving its highest ratings since Malcolm Turnbull’s exit.

The Liberal National Party has narrowed the gap, now trailing 48 per cent to 52 per cent in two-party preferred terms, compared with the 46 per cent to 54 per cent margin a month ago, according to the latest Newspoll published by The Australian on Sunday night. The Coalition’s primary vote has gained two points, rising to 38 while Labor’s has dropped to 37.

Meanwhile, Prime Minister Scott Morrison managed to retain his lead over Opposition leader Bill Shorten in the preferred leader stakes as he emerged with a slightly higher satisfaction rating of 46 per cent, while Shorten’s approval rating fell by one point to 35 per cent.

In contrast, in an Ipsos poll, commissioned by The Age and The Sydney Morning Herald and also released on Sunday night, Labor leads 53 per cent to 47 per cent in two-party preferred terms.

The Ipsos poll also suggested Morrison remains the preferred prime minister, with 46 per cent of those polled preferring him to 35 per cent preferring Shorten.

The polls follow a big week in politics after Treasurer Josh Frydenberg delivered the first budget surplus in 12 years, as he handed down the final budget of the 45th parliament in Canberra last week.

This funding included a $185 million investment into research in ageing and dementia, and additional funding for Home Care packages, which advocacy groups had called on the government to prioritise ahead of tonight’s announcement.

The government also announced the introduction of a one-off Energy Assistance Supplement for pensioners – $75 for singles and $125 for couples – intended to help with costly power bills.

What do you think? Is Scott Morrison your preferred prime minister, or would you like to see Bill Shorten in the top job?