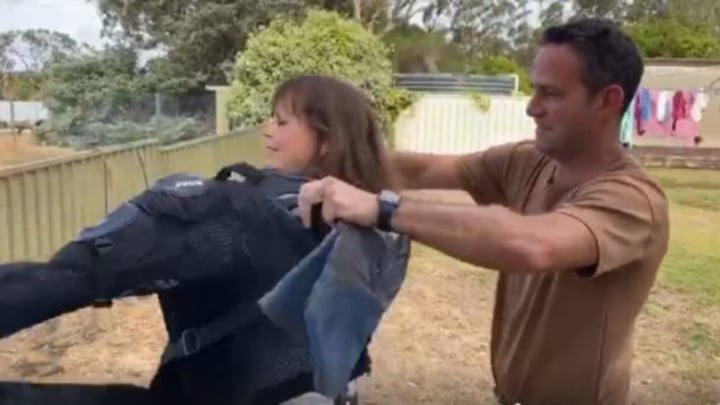 The infamous Australian drop bear has claimed another ‘victim’ — this time, an innocent Scottish TV reporter in Australia to report on the bushfires.

The prank that plenty of Aussies love to pull on visitors to our beautiful but dangerous country — that a vicious animal known as a drop bear is known to drop from trees to savage unsuspecting passersby walking underneath — was caught on video by cameraman Sean Mulcahy, who posted the hilarious three-minute clip to his personal Facebook page.

Mulcahy and Edward were at the Kangaroo Island Wildlife Park to report on the plight of koalas caught in blazes on the island when the cameraman enlisted park owner Sam Mitchell and Army Reserve vet Garnett Hall to play an impromptu joke on Edward.

The video starts with Edward, who clearly believes they are about to film a segment featuring a real, live drop bear, being prepared for filming by being kitted out with a ‘drop bear protection suit’ that looks like the riot gear worn by law enforcement officers but is in fact a motorbike protective jacket worn backwards.

“They do go for the legs,” Mitchell says, deadpan, as he hands her a pair of knee-high motorcycle boots.

Edward looks concerned as she’s handed protective goggles and gloves, saying “I’m a bit worried about why I need this level of protection”.

The camera then turns to Hall — on the island with other reservists to assist in treating animals injured in the bushfires — who talks with an admirably straight face. “Drop bears are a close cousin of the koala but they’re actually really vicious, sort of like [the difference between] a dingo and a normal domestic dog,” he reports with apparent seriousness.

“They’re bigger and have longer claws and actually have really small fangs, which are covered in mild venom, but not like a snake venom that can make you really sick, it just causes local irritation. The third-most common injury we see in tourists in Australia is from a drop-bear attack.”

“What they found was that these things kept dropping out of the trees and attacking them, and they thought they looked like little bears, so they were just like ‘we’ll call it a drop bear’ and the name’s stuck. Technically, though, it’s just a sub-species of the koala,” Hall goes on.

Following the vet’s piece-to-camera, and with Edward fully kitted-out in makeshift protective gear, Mitchell hands her a perfectly normal koala. “Keep your hands down nice and low,” he warns. “No fast movements.”

With the placid animal clinging to her chest and arm, Edward tells the camera that she’s “trying not to worry because I’ve been told he can sense if I’m worried”.

“It’s called a drop bear because they drop out of the tree to attack people,” the reporter says, noticeably leaning away from the koala. “I’ve just been handed it. I had to put all of this protective gear on because of what he might do to me.”

At that point, Hall and Mitchell can’t hold in their hilarity and as they fall about laughing, Edward realises she’s been pranked. “Oh my God, I totally bought this!” she exclaims. “Hook, line and sinker!”

“F****** Aussies,” Edward mutters and laughs as she realises how ridiculous she looks in her makeshift drop-bear protection. Mulcahy told the ABC that the prank was entirely unplanned and only started after he joked with the army vet about drop bears.

“It all unfolded very quickly,” the cameraman said. “As soon as they said to her, ‘do you want to hold one?’, she said, ‘is it safe?’. And it was just on for young and old from there. The army vet, Garnett, he just grabbed the ball and ran with it — I don’t think I’ve ever seen someone pull it off with such conviction.”

Now, Mulcahy is using the viral video to draw attention to the plight of the koalas on Kangaroo Island, some 40,000 of whom have died in the blazes so far.

“In times of tragedy and incessant misery, sometimes humour is the best medicine,” he posted on Facebook, directing viewers to a Gofundme page for Kangaroo Island’s koalas. “If you enjoyed this video, people don’t let Debi’s humiliation be in vain. Please donate directly to help the park who are treating these koalas.”

Kangaroo Island is Australia’s third-biggest island and off the coast of South Australia. It has many large nature reserves designed to protect the native wildlife, and Kangaroo Island Wildlife Park is one of the islands most popular attractions. But more than a third of the island has been scorched by bushfires in recent weeks, killing two people and tens of thousands of animals, as well as destroying 65 homes, according to the Adelaide Advertiser.