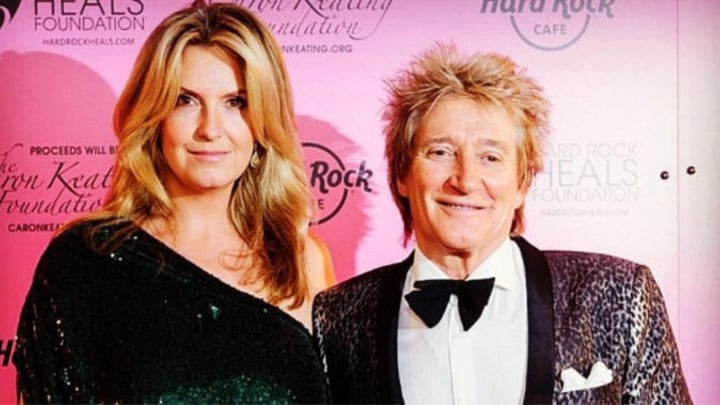 Rod Stewart has gushed over his wife Penny Lancaster and said he's stunned she's stayed with him for so long. Source: Getty

Rod Stewart has gushed over his wife Penny Lancaster and said he’s “stunned” she has kept him around for so long, admitting he was a bit of a “scallywag” in his younger years.

The couple have been married since 2007 and share two beautiful boys together however, Rod said before meeting Penny he had almost given up on finding love. Speaking to The Mirror in an exclusive interview, the singer-songwriter claimed after going through two failed marriages he thought to himself, “instead of getting married again, I’m going to find a woman I don’t like and just give her a house”.

But, that all changed when Penny came along. The model and television personality made him believe in love once more and the couple quickly developed a loving and lasting relationship. And there’s no denying Rod is absolutely head-over-heels for his wife.

“They have not invented the words for how I feel about her,” he told The Mirror. “She is everything”.

The 75-year-old said Penny has helped him learn what makes a long marriage, with the answer being, good manners. Rod told The Mirror before his wife came along he was a bit of a “scallywag” but, she transformed him into a better man.

“You can wear the best suits in the world, look great and have the best carpet, but you still have to show manners,” he said. “Open the door for a lady, stand up when a lady goes to the bathroom when you are having dinner. Secondly, humour is very, very important.”

Prior to meeting Penny, Rod was married to model and actress Rachel Hunter, and before that Alana Stewart. The rock singer has a total of eight children to five different women, including Aiden and Alastair whom he shares with Penny.

He remains close with all his kids, and recently, while being cooped up inside due to the coronavirus outbreak, held a charity concert from his Florida home with his daughter Ruby. The father and daughter joined together for the #TogetherAtHome performance in a bid to raise money for the World Health Organization and Global Citizen.

“Hello everybody, this is Rod and Ruby from sunny Florida wishing everybody a happy Easter,” Rod said in the video shared to Facebook. “We’re going to try and entertain you for 20 minutes … it’s going to be absolutely chaotic because neither of us play the guitar, but we’re going to do our best.”

Throughout the 20-minute at-home concert Rod and Ruby sung in perfect harmony, moving from the lounge room to the piano performing some of Rod’s greatest hits, including ‘When I Was Younger’, ‘Dirty Old Town’ and ‘Swing Low, Sweet Chariot’.

The father-daughter duo took breaks between songs to dance together and chat to fans. At one point, Ruby, who is a singer like her father and also works as a model, even brought in the family’s dog Ziggy to say hello.

As the concert was coming to an end, the pair were joined by other members of the family including Rod’s wife Penny Lancaster and their sons Alastair, 14 and Aiden, nine, with the tight-knit family performed Rod’s hit song ‘Forever Young’ in an acapella style.

Rod also took the opportunity to show his gratitude for those working on the frontlines of the pandemic, saying: “Thank you to all the health care workers worldwide for putting their lives at risk to care for others. God bless you. We’ll pay you back somehow, we have to.”

Are you a fan of Rod Stewart? How long have you been married?