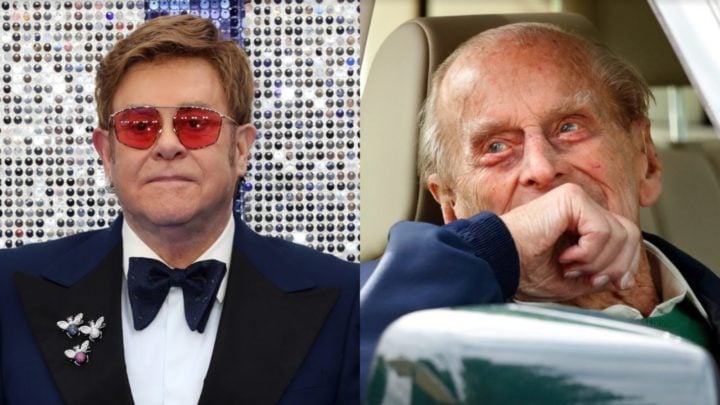 He’s gone on to become a royal favourite over the years, but Elton John’s first meeting with Prince Philip did not go according to plan – when the Duke of Edinburgh completely slated his car in a very awkward exchange.

Recalling the moment he came face to face with the Queen’s husband in his new tell-all book Me: Elton John Official, which is being serialised by the Daily Mail, the legendary musician claimed he was branded a “bloody fool” by Philip over his brightly-painted Aston Martin car.

The pair came face to face when Elton used to throw “huge parties” for Watford football club players and staff at his home in Old Windsor, Woodside. To mark his love and dedication for the club, Elton even had his Aston Martin painted in Watford’s colours — yellow, with a red and black stripe down the middle, naming it the “Chairman’s Car”.

“I didn’t realise how much attention it had attracted until I was introduced to Prince Philip,” Elton wrote in the book, according to the news outlet. He then recalled Philip asking him: “You live near Windsor Castle, don’t you? Have you seen the bloody idiot who drives around that area in his ghastly car? It’s bright yellow with a ridiculous stripe on it. Do you know him?”

Elton said he simply replied: “Yes, Your Highness. It’s actually me.” Incredibly, Philip wasn’t taken aback by the revelation, as Elton then wrote: “In fact, he seemed quite pleased to have found the idiot in question, so that he could give him the benefit of his advice.”

The exchange ended with the prince, who is known for voicing his opinions, saying: “What the hell are you thinking? Ridiculous. Makes you look like a bloody fool. Get rid of it.”

It’s just one of many bombshells in the book, with Elton also revealing he was secretly diagnosed with prostate cancer in 2017, resulting in emergency surgery which led to agonising pain and temporary incontinence following complications. He also recalls being told months later he may have 24 hours to live after contracting a tropical disease.

And elsewhere, the singer opens up about Princess Diana’s funeral for one of the first times – admitting he believes the mourning may have got out of hand in the months that followed, as the altered lyrics to his hit song ‘Candle In The Wind’ became a world sensation.

He admitted his deepest fear when performing the altered song was going into autopilot and accidentally singing the original version, so broke his own rule and allowed an autocue to play – aware of the huge importance of getting it right. He pulled it off flawlessly and kept his composure throughout, but admitted he broke down hours later when he joined his husband David and watched the coverage of the crowds watching the hearse pass on TV.

“In the end, I started feeling really uncomfortable with the single’s longevity. Its success meant there was footage of Diana’s funeral week after week on Top Of The Pops — it almost felt like wallowing in her death, as if the mourning for her had got out of hand,” he went on to write in the book. “I really didn’t think that was what Diana would have wanted.

“And I didn’t want to do anything to prolong it any further. So when Oprah Winfrey asked me on her talk show to discuss the funeral, I said no… I’ve always tried to avoid the topic with journalists. It wasn’t that I wanted to forget it — or her. I just wanted life to get back to some semblance of normality.”

Elton’s autobiography Me: Elton John Official Autobiography is published by Macmillan on October 15.