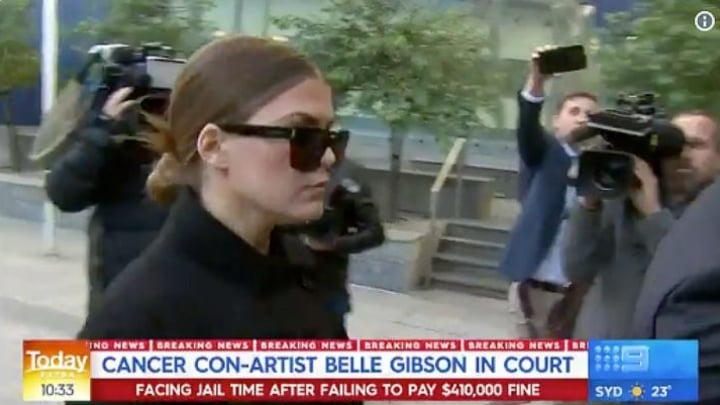 Cancer faker Belle Gibson has finally faced court to explain why she hasn’t paid a $410,000 fine handed down to her in 2017.

The 27-year-old, who famously fooled the world into thinking she was battling brain cancer, was captured on camera by a swarm of reporters as she entered the Federal Court building in Melbourne on Tuesday morning.

Gibson was initially fined the hundreds of thousands of dollars for five contraventions of Australian Consumer Law in September 2017 but reportedly hasn’t paid a cent of it since then.

#BREAKING: Convicted con-artist Belle Gibson has arrived at court to explain why she hasn't paid a $410,000 court fine with a judge warning she is now facing jail time. #9Today pic.twitter.com/bZzAwvzRBm

Speaking on behalf of his client in court, Andrew Tragardh reportedly claimed she doesn’t have the money to afford ongoing legal fees, The Daily Telegraph reports. According to the publication, he also presented two years’ worth of Gibson’s bank statements for the court to examine.

“Significantly, my client does not have unlimited resources,” he reportedly told the court. The case was adjourned momentarily after 10am to give time for both sides to look over the documents.

Gibson made a huge name for herself after claiming to the world in a series of inspirational blogs that she was battling brain cancer – before going on to say she had found a natural cure for it.

But it was all a lie, and it was later revealed the disgraced lifestyle blogger had duped thousands of Aussies – as she never had cancer at all.

Gibson not only lied about having cancer and finding a natural cure, but she also told consumers she would be donating money from her Whole Pantry app and book sales to various charities.

She previously claimed natural therapists had duped her into believing she had inoperable brain cancer.

The largest sum, $150,000, was due to Gibson’s failure to donate 100 per cent of one week’s profits from The Whole Pantry app to the family of Joshua Schwarz. Gibson had become close friends with the Schwarz family after she claimed to have the same inoperable brain tumour that Joshua later died from. The Schwarz family denied receiving any donation from Gibson, and have been left feeling as though Gibson used knowledge of their son’s condition to further her lies.