Resourceful Baby Boomer, 62, gets creative in hunt for full-time work 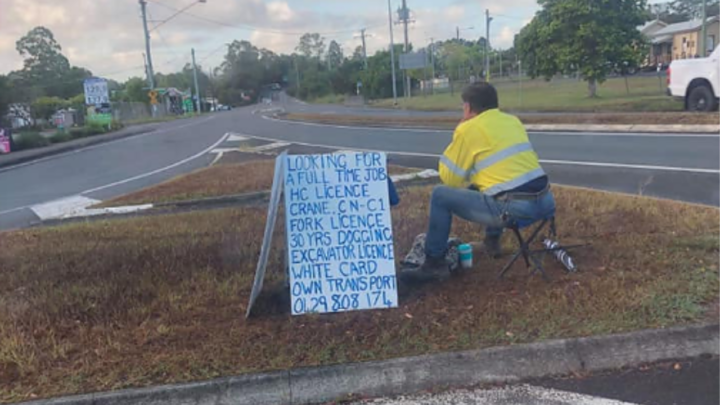 A Baby Boomer struggling to make ends meet has taken his search for employment to the side of the road, brandishing a handwritten sign in a bid to gain himself paid work.

Rex Fairbrother, 62, has spent the past month sitting on a traffic island, hoping to find work after recently making the move to the Sunshine Coast.

Sadly, the hunt for employment has been more challenging than he initially believed, forcing Rex to get creative and think outside the box. Each day, since before Christmas, the determined man has taken up his prime position on Tewantin Road and Elm Street with his cardboard sign in tow.

Although Rex is still without a job, he has had some support in the hunt for employment from the caring community. In true Aussie spirit people from all walks of life have taken to social media to share photos of the hardworking Boomer in hopes someone may see and offer him a position.

The Facebook group Blokes Advice was one of the first to share a snap of Rex, who was pictured sitting patiently with the sign which lists his extensive experience as a rigger and crane driver.

“Hey all, a mate just sent this to me, this blokes been sitting here in the same spot for 3 days chasing work,” the post on Facebook began. “Just found out that he’s been there well before Christmas as well.”

The post continued by explaining how challenging it is for people to gain employment nowadays, even for Rex who has over 30 years of experience.

“I know times are tough but if anyone around the Sunshine Coast (Cooroy, Gympie, Noosa) area as anything going that fits his qualifications, or knows someone that does, give the old fella a buzz,” it read.

“Blokes like this, that are actively searching/looking is absolutely amazing in today’s society. Hope someone reaches out to him.”

The post has since been shared hundreds of time with many more leaving comments of support for Rex who is desperately hoping someone will soon offer him a job.

“Sad to see someone with that much experience be out on the street looking for a job,” one person wrote.

While another added: “Good on him that’s shows commitment”.

Rex himself has spoken out previously about his struggle gaining employment. Early last month the tradie appeared on Win News Sunshine Coast to share his heartbreaking story.

“Day to day living, that’s a struggle, but we’re getting by, just,” a teary Rex explained. “There’s not a lot of work up this way, and I found it a lot easier to just go down on the side of the road, once I picked up enough guts to do it.”

The Boomer explained he has had some luck in the past but so far, nothing permanent.

“I’ve still got a few years left in me yet, so hopefully I’ll find that one job that will be the right job for me,” he told the news outlet.

Rex is far from alone in his search to find work in later life, as last year it was revealed that older Aussies are actually spending longer on the dole than unemployed people in their 20s, debunking the “myth” that Newstart is a young person’s payment.

The findings, collated by the Australian Bureau of Statistics and analysed by The Benevolent Society, revealed that there were 174,532 Aussies aged 55 to 64 signed on, compared to 156,664 between the ages of 25 and 34.

Have you struggled to gain employment? What measures have you taken to try and land a job?