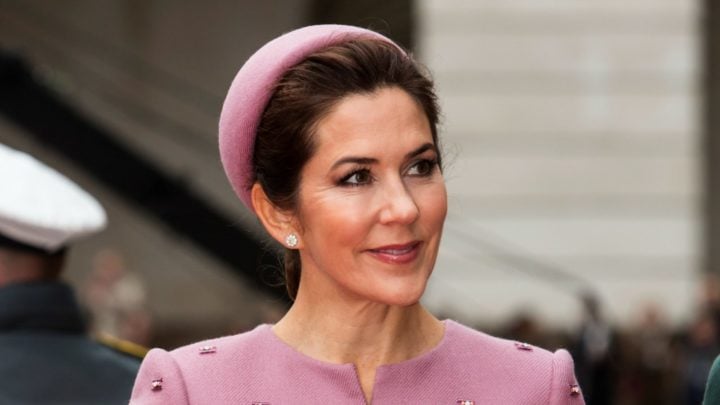 There was no-one quite like Jackie Kennedy to pull off a pillbox hat and coat, but Princess Mary has honoured the late US First Lady with an outfit very reminiscent of those she famously wore during her time in the limelight in the 1960s.

The Tassie-born royal princess stole the show in a light pink coat dress and matching pillbox hat at the opening of parliament in Copenhagen, joining her husband Prince Frederik and mother-in-law Queen Margrethe for the occasion. The outfit stood out with beaded detailing and Mary proved she’s just as thrifty as the Duchess of Cambridge as she was previously pictured wearing it in December last year during a trip to Riga, Latvia.

The princess completed the look with some burgundy heels and wore her hair tied back under the hat. And bending down for a deep curtsy to welcome her mother-in-law, she proved a complete natural in front of the cameras once again.

The Danish royal family shared a series of photos online from the day, writing on Instagram: “According to the Constitution, the Parliament must open on the first Tuesday in October, and at its opening, the first item on the agenda is always to elect the chairman and deputy chairmen of the parliament. Subsequently, the prime minister gave his opening speech, which ended with the assembly and the guests promising a triple living for Denmark.”

The outfit was incredibly reminiscent of those often worn by American First Lady Jacqueline Kennedy in the ’60s, with some of her most iconic photos over the years showing her in stylish hats and coat dresses in a similar design.

Jackie O is undeniably one of the greatest style icons of the last century. During her first year in the White House, she started more than a few trends, including popularising the pillbox hat which she often wore in different colours. She had an ability to make even the most casual outfits look chic, and often paired headscarves with giant sunglasses when she was outdoors.

And it comes just hours after Mary pulled another classic and elegant number out, opting for a completely maroon outfit with a tight-fitting below-the-knee skirt in the same colour. And she ensured she completed the theme perfectly with some sky-high plum-coloured stilettos, braving some tricky cobbles to pose like a natural in the elegant footwear.

The royal was welcomed by the President of the Supreme Court in Copenhagen, Denmark, where she celebrated the court’s 100th anniversary at Thorvaldsens Museum. And she was certainly welcomed in style, as she proudly held up a small bouquet of flowers for photos outside the building.

Wearing her hair in loose waves and adding some drop earrings, Mary couldn’t fail to stand out as she once again delighted crowds. In fact, she’s been going from strength to strength throughout her years in the royal family in Denmark, winning hearts right across not only the country but the world too.

Born in Tasmania, she moved to live there with her husband Frederik after marrying in a lavish fairytale wedding in May 2004, before welcoming four children together. And she’s proved a natural in the royal spotlight ever since.