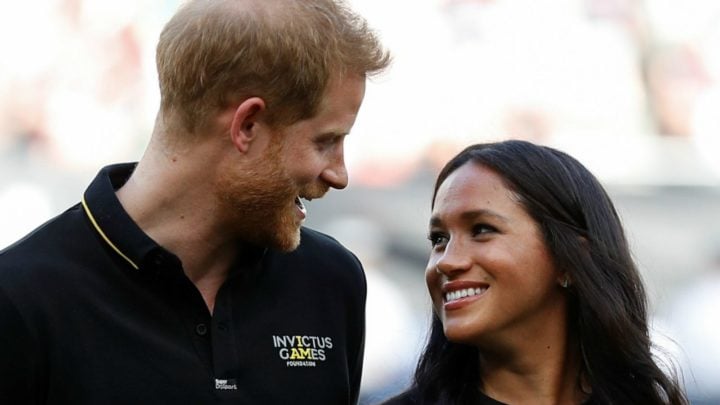 The Duke and Duchess of Sussex beamed as they stepped out together on a rare outing, as Meghan continues her maternity leave. Source: Getty.

It has been less than two months since she welcomed baby Archie Harrison Mountbatten-Windsor into the world, but new mother Meghan took a break from her maternity leave on Saturday for a rare outing with husband Prince Harry.

The couple have been seen together just twice since their son was born on May 6, but the Duchess of Sussex made a public appearance on Saturday as she attended a baseball game in London with the duke.

As a proud American, Meghan stepped out at the Boston Red Sox vs New York Yankees baseball game, which was held yesterday in support of the Invictus Games Foundation.

And the mother-of-one looked stunning, as ever, in a flattering black Stella McCartney mini dress which featured a ruffled hem and a broad belt around her waist with a large statement gold buckle.

Ditching her usual stiletto heels for the occasion, Meghan instead stepped out in a pair of stylish black suede flat pumps with a slingback, decorated with a pretty bow. While the duchess wore her long hair down in her usual style.

Before the game, the royal couple visited both teams in their dressing rooms where they chatted with the players – and the new parents even received a gift from each side.

Boston Red Sox players gave the Sussexes an adorable red baby grow for their newborn son, which featured the teams emblem on the front. While the Yankees gifted a tiny baseball jersey to the family, which featured Archie’s name on the back, alongside the number 19.

The couple then spent time with some of the Invictus athletes before stepping out onto the pitch at London Stadium to watch the first pitch.

The service, which is held annually in honour of Her Majesty the Queen’s official birthday, saw Meghan join other senior members of royalty for the carriage procession, followed by the famous appearance on the balcony of Buckingham Palace to watch the Royal Air Force perform a fly past.

Meghan looked incredible for the occasion, just the second time she has been pictured in public since giving birth, in a navy ensemble while her husband stepped out in full military regalia.

According to reports in the British media, Meghan’s next outing is likely to be for her son’s christening which has been rumoured to be taking place this coming week on July 4, a nod to Meghan’s American heritage.

Are you pleased to see Meghan out in public again? Are you excited for baby Archie’s christening?