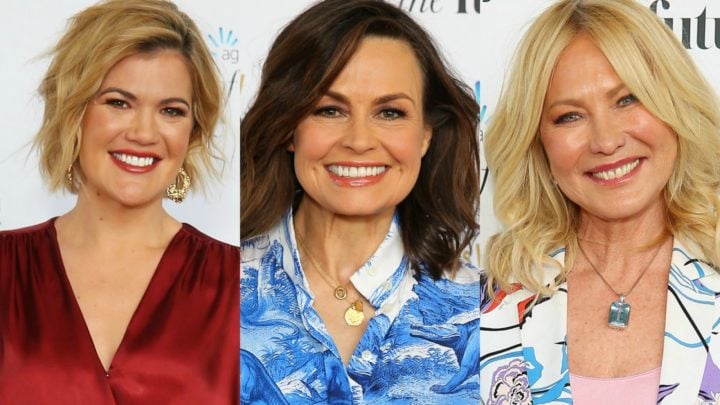 Some of our most loved and glamorous stars of the small screen have joined forces today to attend a glamorous event in Sydney. Everyone from Lisa Wilkinson to Kerri-Anne Kennerley, Sarah Harris, Jessica Rowe and more put on a vibrant display as they stepped out for the Women of The Future Awards.

Lisa stole the show early on when she made her grand entrance alongside her beautiful daughter Billi FitzSimons. For the occasion, The Project host put her best fashion foot forward sporting a beautiful blue patterned midi dress which featured dramatic sleeves.

The outfit matched perfectly with her blue clutch, gold jewellery and nude pointed heels. While she wore her brunette locks in effortless waves for the star-studded occasion. Meanwhile, her gorgeous daughter Billi didn’t disappoint in a floaty white linen dress matched with an elegant pair of strappy nude heels.

She was joined at the event by Studio 10 host Kerri-Anne Kennerley who took centre stage in a vibrant floral power suit. The presenter showed off her quirky style in the fitted blazer which featured an eye-catching floral pattern and retro shoulder pads. She completed the look with matching suit trousers and a pink top.

Standing tall, Kerri-Anne chose to pair the ensemble with red statement boots and very natural looking makeup, which included a touch of blush and a soft pink lip. The entertainer wore her short blonde locks curled for an effortlessly chic look.

Elsewhere, fellow Studio 10 host Sarah Harris put on a very glamorous display in a stain deep-red wrap-around dress which featured an asymmetrical hemline. She finished off the modest yet fashionable look with statement gold earrings and gold strappy heels – proving she’s every inch the fashionista.

Former Studio 10 host Jessica Rowe was also pictured at the fashionable event sporting a very colourful frock. Never one to shy away from a bold outfit, the Australian journalist went all out in the patterned red and pink dress, which featured very dramatic fringed sleeves. She finished off the ensemble with red velvet boots which matched perfectly with her pink hair.

Elsewhere, former Home and Away star Kate Ritchie made an early and grand entrance in a stylish black pant suit, which featured striking red panels on either side. She finished off the outfit with simple black heels and a matching side bag – acing the effortless yet stylish look.

Meanwhile, it comes just a week after Lisa stepped out in a coral power suit for a glamorous event in Sydney. The Project host was one of the special guests at the David Jones SS19 Bright Night Party and stole the show when she made her grand entrance.

While she’s known to wear some truly glamorous dresses to star-studded events over the years, Lisa made a statement when she stepped out in the trendy power suit. The television presenter was full of confidence in a pair of tailored pants and a matching oversized double-breasted jacket.

The outfit complimented the journalist in all the right places and matched perfectly with her gold heels, black clutch, trendy glasses and gold jewellery. While she wore her brunette locks in soft almost-straight waves for the event.

Are you a fan of these television stars? Do you like their outfits?