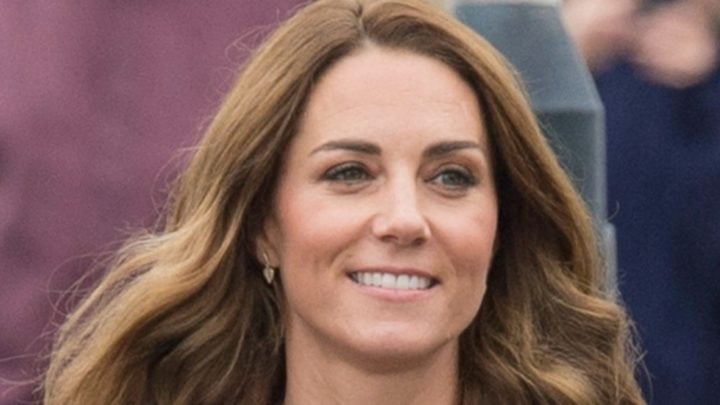 Catherine continued her fashion takeover ahead of the inaugural regatta The King’s Cup on Thursday. Source: Getty

There is no denying Catherine has an impressive wardrobe collection, always stepping out in a stylish ensemble of some sort and her latest outfit was no different as she perfected the smart casual look in a pair of tailored pants and white sneakers.

The Duchess of Cambridge continued her fashion takeover as stepped out in stylish flared navy pants and a colourful peplum top ahead of the inaugural regatta The King’s Cup on Thursday with her husband Prince William.

The mother-of-three paired the casual yet stylish ensemble with white sneakers and wore her hair styled in soft waves over her shoulders. Meanwhile Prince William looked dapper in a navy-blue suit matched with a sky-blue shirt and casual shoes for the occasion.

The royal couple’s dressed down appearance came just before they went head-to-head as skippers of individual sailing boats as part of an eight boat regatta race.

Prince William and Catherine hosted the inaugural regatta The King’s Cup in Cowes to raise awareness and funds for eight of Their Royal Highnesses’ patronages.

Read more: Prince George and Princess Charlotte cheer on Will and Catherine at King’s Cup

During the race, Prince William was competing on behalf of Child Bereavement UK, while Catherine was representing the Early Years program that’s delivered by the Royal Foundation. They were joined by an array of other well-known faces including Dan Snow, Bear Grylls, John Bishop, Katie Thistleton and Helen Glover.

⛵ …and they’re off! The Duke and Duchess of Cambridge are going head to head in The King’s Cup, raising awareness and funds for eight of Their Royal Highnesses’ patronages. The Duke is competing on behalf of @childbereavementuk and The Duchess on behalf of the Early Years programme delivered by The Royal Foundation. Their Royal Highnesses are joined by Fara Williams for @centrepointuk, Dan Snow for @ldnairamb, Bear Grylls for @tusk_org, John Bishop for @actiononaddiction, Katie Thistleton for @_place2be, and Helen Glover for @afnccf. Their Royal Highnesses hope that The King’s Cup will become an annual event, bringing greater awareness to the wider benefits of sport, whilst also raising support and funds for the causes that The Duke and Duchess support. Visit the link in our bio to find out more.

“Their Royal Highnesses hope that The King’s Cup will become an annual event, bringing greater awareness to the wider benefits of sport, whilst also raising support and funds for the causes that The Duke and Duchess support,” Kensington Palace said in a statement.

While Bear Grylls ended up winning the King’s Cup, the race wasn’t as successful for Catherine. The mother-of-three finished in last place and was hilariously awarded a giant wooden spoon for her efforts.

“It’s the taking part that counts,” the official Kensington Royal Instagram page joked, alongside side two photographs of an embarrassed Catherine being awarded her spoon.

It's the taking part that counts…🥄

Read more: Catherine is gorgeous in summery frock as she receives new patronage from Queen

Are you a fan of Catherine and Prince William? Do you think Catherine’s style?