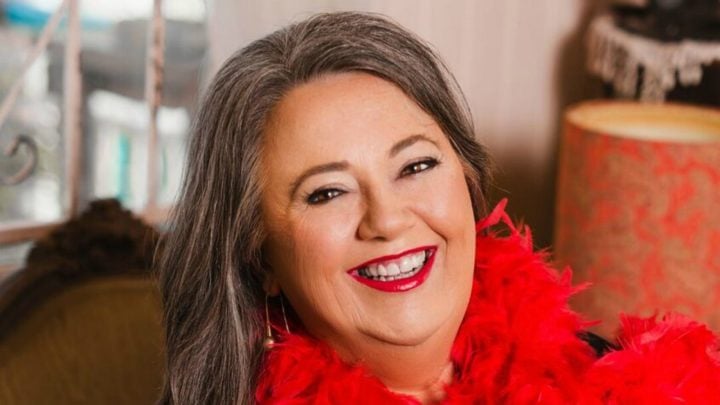 Susan Jarvis has set up the website to make a difference for older and disabled people. Source: Supplied.

An Aussie mother has revealed how leaving an unhappy marriage pushed her to embark on a journey of sexual discovery – leading to a wild romance with a younger man, some experimenting with other women, finding true love with a new partner and even setting up her own sex website.

Brisbane woman Susan Jarvis, 52, has opened up exclusively to Starts at 60 on how she finally found the courage to walk away from her 14-year marriage in 2005 after it left her feeling down and battling weight gain due to her unhappiness.

“I was dying in that marriage, I was about 165 kilograms, I was so unhappy,” she explained. “My girlfriend wrote to me, I’d just visited her, and she said, ‘I’m so scared that I’ll be coming to your funeral in the near future, you deserve to be sliding sideways into your grave with a champagne in your hand at a very old age’.

“That was a real wake-up call. It was a difficult process to go through but I’m so glad I did it, it changed my life.”

As their marriage broke down in the final years, so did any intimacy they shared, and Susan revealed that she was celibate for the final three years she was with her ex-husband – plus the year after they finally split as she spent some time on her own.

Eventually ready to date again a year later, having lost an incredible 40kg, Susan took the plunge and tried online dating. Fairly soon she met a man seven years her junior and it completely reawakened a sexuality she’d long since given up on.

“He was only meant to be a six week love affair but we ended up being together for seven years,” she said.

It proved to be a huge confidence boost for the mum, who shares a 28-year-old daughter with her ex-husband, as while she described her sex life with her ex as fairly “boring”, it became experimental and fun with her new partner.

From the open nature of the relationship came a surprise realisation for Susan, as she discovered she was also attracted to women.

“I realised I’m bisexual and I didn’t want to die without knowing what it was like to be with a woman,” she said.“I really don’t want to be on my death bed wishing I’d done something.”

While she never had a long-term relationship with a woman, Susan said she enjoyed a few flings before going on to meet and fall in love with her current male partner in 2015.

“He’s the love of my life. We’ve probably been in love with each other since we were teenagers because he’s exactly the kind of guy that I’ve been looking for and I’m the woman he’s always hoped for,” she explained, adding that once again their sex life has proven incredible compared to her past experiences.

Her journey led the mum to realise just how underrepresented women – and men – are as they get older when it comes to their sex lives. She has now set up her own website and online sex store The Spicy Boudoir aimed at inspiring couples over 50 or anyone struggling with a disability to embrace their sexuality and enjoy intimacy again.

“Originally I had an opportunity to look at a party plan business and to buy that, but when I was doing my research I was looking at the online stores and the other party plan business in Australia and I just thought, ‘There’s nothing here of taste or quality, it’s all vulgar’,” Susan – who is a public servant by day – explained.

“I also noticed the lack of representation for people with a disability.”

The site’s aim is to strip away negative stereotypes and stigmas associated with the expression of sexuality, particularly when it comes to older couples or those struggling with illness or a disability – with sex toys on offer as well as first-person blogs and expert advice.

“There’s a common belief that once you’re over 50 and hit menopause (or man-o-pause) that your sexuality becomes redundant. Another common misconception is that people with a disability do not desire sex. That is entirely untrue,” she insisted.

“My mission has become to create a brand experience completely unlike the stereotypes of the sex industry. I do not want my customers to be hit in the face with neon colours, plastic genitalia or phallic devices as soon as they enter my store.”

Susan now hopes to work with advocacy groups in the future too, offering occupational therapists and advice for clients suffering with disability and age-related issues. She’s also working on blogs and advice for older people to encourage them to open up and embrace their sexuality.

Asked if her own confidence has gone up since, she said: “Yes – I had no confidence. But I really believe that I put myself on a journey to rediscover all aspects of my intellectual and cultural [life] and reigniting my sexual confidence.”

Susan is now urging people in a long-term relationship who have managed to get over the hump to revive their sex life, or any couples struggling with health concerns or illnesses and disabilities, to get in touch. Finally, if you’d be interested in modelling for her site, just visit her website The Spicy Boudoir here for more information and contact details.

Have you experienced anything like this yourself? Did leaving an unhappy relationship help you to embrace your sexuality again?