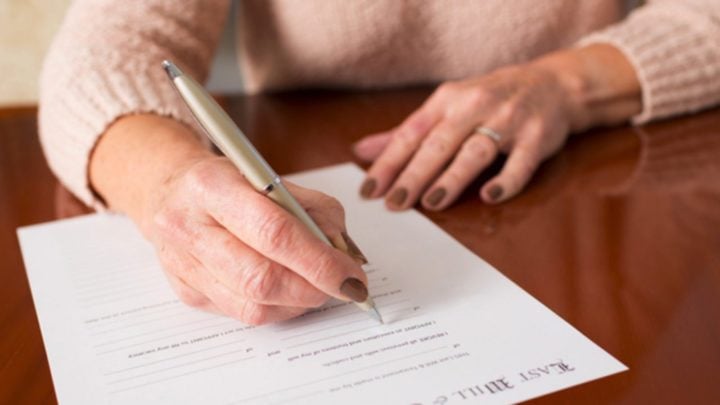 Te mother admitted her own mum wants to cut the girls out of her will now. (Stock image). Source: Getty.

An Aussie mum has shared her anguish after both of her daughters estranged themselves from her without any warning – before cutting off any contact she had with her three grandchildren.

Now she’s revealed how she came face to face with them at her mother’s funeral earlier this year – the first time she’d seen her youngest daughter in over a year – but rather than offering her support, she claims they shunned her completely and even sparked a family row by the graveside.

Speaking in an exclusive chat with Starts at 60, the 57-year-old woman – who wished to remain anonymous – has revealed she’s at her wits’ end after repeated attempts to build bridges with her daughters have been ignored.

Despite them always being close, she said a rift began to form with her youngest daughter when she, her husband and their baby daughter moved in to live with her towards the end of 2017, in a rental home in Sydney.

However, things turned sour when her 30-year-old daughter told her she was leaving with almost no notice – and allegedly refused to pay the money she owed for bills and repairs.

She admitted things came to a head around three weeks before they moved out, when she accidentally overheard her son-in-law saying he felt he had to compete with her for his baby daughter’s affections.

“You’d think with us being grandparents that they’d be happy [about us being close to her],” she said. “We’ve just been cut off, we’ve been cut off.”

The mum has since found out that her daughter and son-in-law have also cut his family off too, seemingly without reason.

While the rift began with just her youngest daughter, she said her eldest daughter has also cut her off since – choosing to side with her sister instead.

“I’m actually quite strong now talking about this. I wasn’t but I’ve had a lot of help, we’ve had psychologists, I’m on some medication. Then of course the menopause kicked in and that’s emotional as well… It’s been a year now,” she said of the painful rift.

“I’ve tried to reach out to them many times to ask why they’re keeping me from my granddaughters … but nothing.”

The woman’s eldest daughter welcomed a second baby girl earlier this year – her third grandchild. But while she had a text telling her about the pregnancy, and another to tell her she’d been born, there has been nothing more.

“I kept texting saying, ‘Could I please have a photo of my granddaughters, could you please send me something, I’ve had nothing for a year, please girls, I don’t know what I’ve done – you’re not telling me’,” she recalled.

Sadly, the rift also meant both girls blocked out their grandmother too and still weren’t talking to her when she suddenly became ill after suffering a stroke earlier this year.

“My mum passed away at the end of February,” the woman revealed. “She was 91. She had not seen the girls, my two daughters, since Christmas 2017 when we all got together. She went to her grave with this.

“She’d say to me before, ‘I’m not having this, it’s ridiculous, they’ve hurt you they’ve hurt me’. She was very sharp.”

The eldest daughter managed to visit her grandmother in the hospital before she passed away, but it ended in more heartache when she came face to face with her mum there.

“It was very awkward because she hadn’t spoken to me,” the woman said. “She came to me to try and throw her arms around me, and I was very cool, I wasn’t cold and I gave her a hug, but I was thinking, ‘What’s going on?’ She stood back then when she saw how I reacted. My sister reacted the same and my daughter got upset about that. She stood in the corner and spoke to my other sister who’s taken sides.

“My other sister then told us we were disgusting for the way we were treating her, but we just said, ‘Hang on, this is pretty disgusting too’.”

Before her mum passed away, the woman admitted she was more than aware of the family rift, despite her best efforts to hide the truth from her.

“Even when I spoke to her [Mum] in the hospital she was a bit slurry and said, ‘Is everything okay with the girls?’ I said, ‘Yeah Mum’, and she said, ‘No it’s not’. I didn’t want her to take it to her deathbed.”

The funeral took place around a week later and both of the daughters came – something the mum said she wasn’t expecting. However, rather than bringing them together, the situation went from bad to worse.

“They [the daughters] didn’t speak to us,” she revealed. “They came to the church and sat halfway down. We were at the front, my three sisters and I holding hands. We watched them come into the church grounds and then they came in afterwards with their dad.

“It was disgusting, we were very annoyed and it was more stress on a day we didn’t need it… We didn’t get flowers when she died, nothing, no message to me at all.”

After the service, she revealed that one of her friends approached her eldest daughter in the church grounds and pleaded for a word, but when she was turned away, the friend apparently said to her: “If you don’t sort this, the next funeral you’ll be going to will be your mother’s.”

Read more: Mending the rift: The first steps to overcoming a painful estrangement

“I had no idea this was happening,” the woman admitted. “My eldest turned on her heel – with my other daughter – and approached my sister. She told some lie about what my friend had said. Then by the graveside they had words about what was said. It’s just ridiculous. This is at the graveside, while Mum’s coffin is being lowered into the ground.”

The woman has now blocked both of her sisters completely, feeling betrayed that they haven’t stuck by her.

Desperate to make amends following her own mum’s death, she said she’s made repeated attempts to contact her girls and even asked for a mediator from Relationships Australia to get involved – but says she’s only been ignored ever since.

Have you been through anything like this? Are you estranged from your adult children or grandkids?