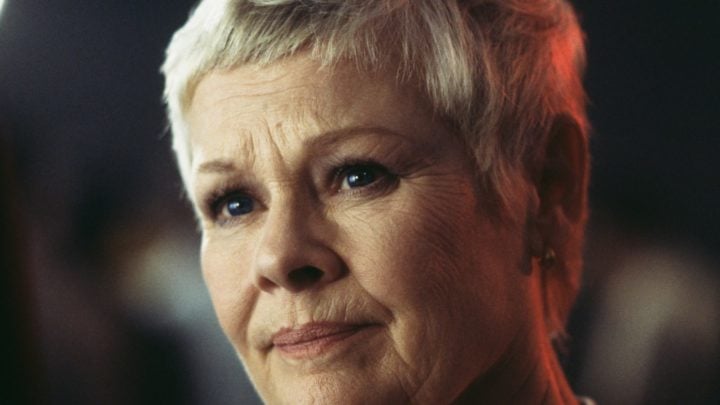 She played iconic character ‘M’ in the James Bond movies from 1995 right through to 2015, but Judi Dench has now revealed it was her late husband who ultimately convinced her to take on the role.

The 84-year-old actress first appeared in film Goldeneye alongside Pierce Brosnan in 1995, kicking off a long-running spot in the hugely popular films. Her late husband Michael Williams was able to watch his wife in that hit, plus Tomorrow Never Dies (1997), and The World Is Not Enough (1999) before he sadly passed away in 2001.

Now, speaking in an exclusive chat with The Daily Star, Dench has revealed it was actually Williams who first convinced her to become ‘M’.

“I didn’t know anything about M. I just thought the writing was really witty. My husband was mad keen that I should do it, so he could say he lived with a Bond woman!” She told the news outlet, according to The Mirror Online.

Continuing her role and honouring her husband’s wishes following his death, Dench went on to star with Brosnan in Die Another Day in 2002, before he was replaced by actor Daniel Craig in the leading role and they went on to star in 2006 film Casino Royale, 2008’s Quantum of Solace and finally 2012’s Skyfall before Dench’s character’s death.

She has since been replaced by Ralph Fiennes in the role of ‘M’, but appeared in a short video at the start of 2015 movie SPECTRE – ending her time in the movies for good.

But it wasn’t just her husband who was her biggest supporter, as Dench added to the news outlet that her grandsons’ friends were also fully behind her.

“These little boys would come and you’d seem them look…’Yes, it’s me! One step out of line and I’ll have to lock you up!'” she joked.

Dench married her husband in February 1971, the same year they co-starred in a stage production of John Webster’s The Duchess of Malfi together. They had one daughter, Tara Cressida Williams, who is better known as Finty Williams. Sadly, Williams passed away in 2001 after a battle with lung cancer.

Speaking to the British version of Good Housekeeping previously, she said of her husband: “For 30 years, I was divinely happy with Michael. I love the company of being in a relationship – I’m no good on my own.”

Are you a fan of Judi Dench? Did you like her in the role of ‘M’?