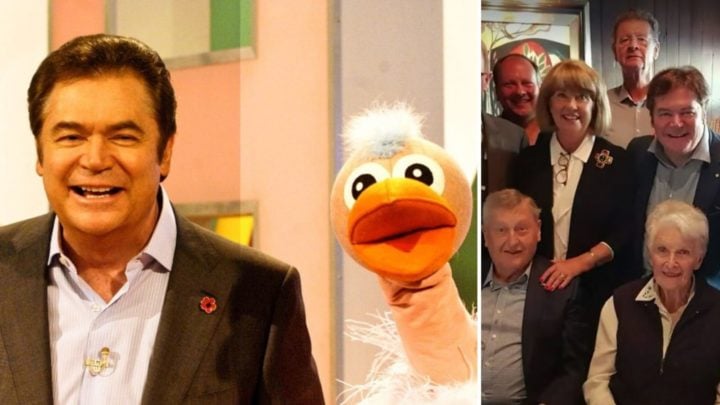 Hey Hey It's Saturday was one of Australia's most beloved shows and years after the show finished, some of the biggest stars have reunited. Source: Instagram.com/hey_hey_its_saturday_official and Facebook.com/Studio10

Hey Hey It’s Saturday was one of Australia’s most popular shows and anyone who watched TV of a Saturday between the ‘70s and ‘90s likely came across Daryl Somers, Ossie Ostrich, Plucka Duck and the rest of the Hey Hey crew at one point or another.

The show originally began as a Saturday morning children’s TV show, before moving to a primetime evening slot. Some of the most popular segments on the show included Celebrity Heads, Red Faces and Chook Lotto, while an array of celebrities would appear on Hey Hey each week.

The show originally ended in 1999 and despite returning for a brief reunion series in 2009 and 2010, it’s been some time since fans have seen the gang back together.

A photo of many of the original stars reuniting for Ernie Carroll’s 90th birthday was shared on Friday’s episode of Studio 10. Carroll is best known as the man behind Ossie ostrich – the iconic pink bird puppet on Hey Hey. He also appeared in an array of other TV and radio shows throughout his career.

A special birthday lunch was held in Melbourne on Thursday for the iconic star with some of Hey Hey’s biggest names including Somers, Red Symons, Jacki MacDonald, Wilbur Wilde and John Blackman reuniting for the special occasion. Molly Meldrum, who was another one of Hey Hey’s biggest stars, did not appear in the photo.

One person wrote: “The best show on tv!!! Darn shame all of those wonderful characters aren’t still on tv on some other fun talk shows like we had years ago like Blankety Blanks.”

Another said: “Wow, so long ago. It was a great show.”

A third added: “Happy birthday Ernie good to see the whole gang there.”

It was great to see so many of the stars looking happy despite some tougher times in recent years. Blackman, who was known for voicing Dickie Knee on the popular variety show, confirmed last year he was battling cancer.

Appearing on A Current Affair, Blackman said cancer was slowly spreading around his mouth and in to his jaw bone and needed to have his whole jaw removed.

Meanwhile, Skyhooks performer Symons lost his son Samuel to cancer last October. He was 27 when he died and had first been diagnosed with a brain tumour at the age of four.

While there doesn’t appear to be a Hey Hey It’s Saturday reboot in the works just yet, vintage clips and moments from the show are regularly shared online.

Did you watch Hey Hey It’s Saturday? What was your favourite part about the show?