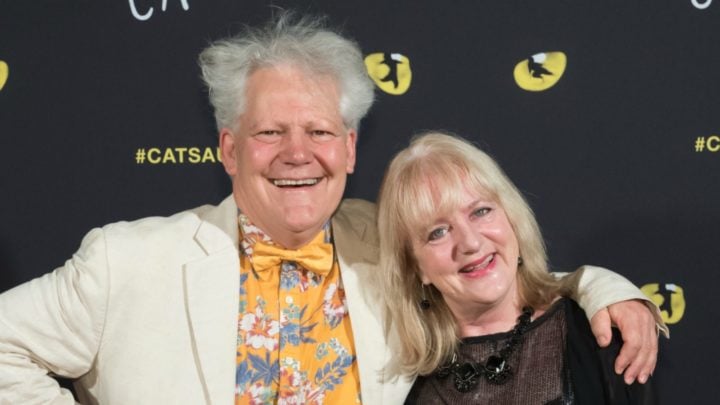 She’s been with her partner John for 38 years, but Studio 10 favourite Denise Scott has parted from tradition and never married the father of her two children.

And now the TV star, 63, has opened up on her personal reasons for being apprehensive about tying the knot – and the truth behind her sex life after 60.

While the Studio 10 panel are known for their X-rated chats on air, Denise tends to remain fairly silent when it comes to discussions about sex – letting her co-hosts such as Angela Bishop, Kerri-Anne Kennerley, Sarah Harris and Denise Drysdale take the lead instead.

But she’s far from shy and is well-known for her funny one-liners on the show.

Now, speaking in an exclusive chat with Starts at 60, Denise has admitted that being with someone as long as she has has meant she tends to keep her sex life more private.

Denise also recently starred in theatre performance Disappointments with co-star and close friend Judith Lucy, focusing on the difficulties associated with ageing, from arthritis to menopause right through to rejection and the fake lives people portray on social media.

“Judith will still talk about it [sex] but she’s single,” Denise explained. “I’ve been with John 38 years, I’ve really got not a lot to say about it – much to his disappointment!”

Asked if it’s something she’s still interested in, she joked: “I prefer wine! If I was given the choice!”

However, the couple couldn’t be happier together and Denise said while she’s not ruled out marriage in the future, it’s not something either of them have ever focused on – and she explained it’s likely down to her never wanting to be tied down by a contract.

“I always joked that I haven’t made a decision yet, I don’t like to rush into things!” she joked. “For me, I was a bit of a, not a commitment-phobe, but I didn’t like contracts. I think that’s why I liked the idea of stand-up comedy, because I didn’t have to sign a contract or have a boss.

“I think it’s the same with getting married, I didn’t like the idea of someone saying, ‘Well now you have to stay with this person for the rest of your life’. I think that was it for me.”

Asked if she’s ruled it out, she said: “I haven’t ruled it out! John loves an event, he loves a big public event!”

However, while it’s not something that’s ever really been on Denise’s radar until now, she said John has never proposed either and added: “Maybe he’s got something going on too!”

Denise, who was the latest star to be voted out of Dancing With The Stars on Monday, has enjoyed a major shift in her career in more recent years — from more stand-up comedy to TV appearances, including her current stint on Studio 10.

Read more: Denise Scott: The series of heartbreaks that sent me to bed for a year

Her latest challenge was training for the dance show, and while Denise has no past dance experience at all, she said she’s loved practicing and learning the craft — and it even eased her pain from her crippling arthritis.

“It [the arthritis] is pretty good at the moment – the dancing is helping. There’s one ankle that there’s no help for, there’s nothing, and as I’m always yelling at people – ‘yes I have heard of turmeric! Yes I have had cherry juice!’ but the movement has been really good for it,” she said.

“I really sympathise with people who are reading this and thinking, ‘I’m in so much pain. Good for you but I can’t move’, but it has really helped.”

Are you a fan of Denise Scott? Did you make the decision not to marry a long-term partner?