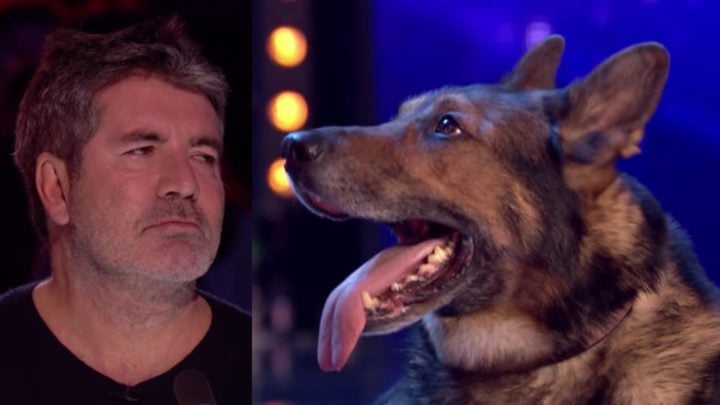 A brave police dog left judges in absolute disbelief for more reasons than one during an emotional performance on Britain’s Got Talent this week.

The adorable pooch, named Finn, brought tears to the eyes of many for his gobsmacking abilities and ultimate commitment to his beloved owner Dave.

From the moment he stepped out onto the stage the talented pet had the crowd captivated as he sat patiently waiting for his orders. But little did they know the true story behind Finn’s life and what he had accomplished over the years.

“We all think our dogs are magical, but Finn truly is and for more than one reason,” owner Dave announced to the audience.

Dave then asked judge David Walliams to think of an object and write the word down, before telling the actor to hold the piece of paper up to his chest so nobody could see.

David was then asked to Finn the word he had written while Dave stood with his eyes closed. Incredibly, after the judge returned to his seat, Dave bent down to his dog and placed his ear up to Finn’s mouth as if he was listening to what he had to say.

“David, the word is table,” Dave announced to the crowd. To the amazement of everybody watching David turned the paper around to reveal that exact word.

But the act wasn’t over, as Dave had another message to share with the judges, which left all four of them fighting back tears. The doting owner revealed Finn was more than just a dog, he was actually a valued member of the police force.

“I am a policeman and Finn has been my partner in the force for seven years,” a message flashed up on a screen behind the performers.

It went on to explain that Dave was targeted in an attack three years ago and that he would be dead if it wasn’t for Finn.

“In 2016, whilst on police duty, an offender went to stab me with a ten inch knife,” it read. “My life was in danger.

“Finn bravely jumped in front of me and saved my life. Whilst risking his own. He was left fighting for his life.”

Heartbreaking images of Finn lying injured as veterinarians worked to save his life were shown on the big screen with many struggling to hold back years as they watched on in amazement.

“Seeing my best friend on the brink of death just broke my heart,” the message continued. “Thanks to the amazing team of vets, Finn’s life was saved. My best friend was back.”

Once the tear-jerking slide show was finished judge Simon Cowell was asked to take to the stage. Unlike his fellow judge, Simon was made to kneel down in front of Finn and look into his eyes.

“For the last two weeks we’ve been asking friends to think of a word that best describes Finn,” Dave explained to the crowd.

He flicked through a notepad and added: “We’ve got companion, brave, amazing, incredible, fast.”

Simon was asked to hold up his left hand and take hold of the notepad. Then using his right thumb, open to a random page and tell the audience what word was written down.

“Now there is no possible way I could know what word you were going to pick,” Dave went on. “But Finn did. Because before we came here this evening Finn had a word engraved on the tag of his collar.

“Simon can you please have a look at the word on Finn’s collar and read out loud the word there.”

Shocked and amazed the audience got to their feet and cheered loudly, captivated by what they had just witnessed.

What did you think of Finn and Dave’s performance?