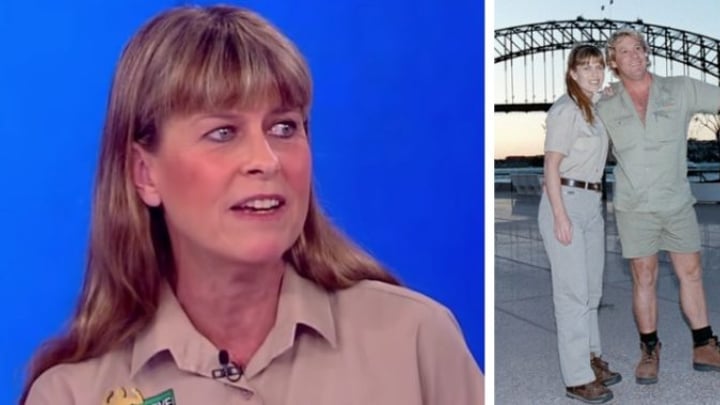 Terri Irwin revealed what made her and Steve ditch their honeymoon. Source" YouTube/The View (left) and Getty (right).

They enjoyed one of the most famous marriages in Australia, but Terri Irwin has now revealed she never made it on her honeymoon with her late husband Steve – for a very heartwarming reason.

Appearing on US chat show The Talk, the 54-year-old was joined by daughter Bindi and son Robert as they reminisced on some of their happiest memories with the ‘Crocodile Hunter’ – more than a decade after his tragic death.

Recalling her wedding day in Oregon in 1992, Terri told the panellists on the show: “We got married in my grandmother’s church.” However, as they planned to enjoy a romantic honeymoon shortly after, she explained they got a phone call that “some bad guy was going to shoot a crocodile”.

She added: “[We were asked] would we ever want to come and try to save it and maybe film it as well… So we abandoned the honeymoon, went straight back to Australia, and I’m with my new husband filming this exciting opportunity to save a crocodile and protect these beautiful animals.”

Smiling at the memory, Terri recalled being thrown into the deep end – quite literally – when her husband asked her to help him hold the crocodile down.

“It was a bit daunting when we’d catch the croc and Steve said, ‘You jump on its head and then I’ll get the net off’. I’m like, ‘What? I thought I was going to watch you do this’!”

Terri was married to Steve for 14 years before he was tragically killed by a stingray while filming sea scenes for one of his documentaries. However, while she has continued to mourn his death since, Terri and her children have turned their grief to good and continued his legacy by running and developing Australia Zoo.

They were on The Talk to promote the family’s new Animal Planet TV show, named Crikey! It’s the Irwins. It will follow the three of them, plus Bindi’s fiance Chandler Powell, as they live and work at Australia Zoo – continuing the work Steve cared about so much. The series will premiere on October 28.

Meanwhile, it comes after Terri recently revealed Steve never thought he would have a long life.

Talking on ABC’s Anh’s Brush With Fame, the mother-of-two said: “You know he never thought he would have a long life. He just always kind of had this sense that his life would be cut short”.

“I remember him saying to me, ‘I don’t think I am going to film anymore, I think I am just going to spend time with my kids’,” she added.

She also revealed that she’s still processing the grief over Steve’s death, saying: “You don’t ever get over grief. It changes, but you never wake up one morning and go, ‘Oh, I’m done with that.’ That was the challenge in the journey after Steve died.”

Did you go on a honeymoon? What would you say if your other half suggested cancelling it for work like this?